The famous Halifax fog - more common in the early summer, descended on the port today September 10 and delayed ship movements, particularly in the Narrows. While at sea ships can navigate reasonably well with radar and satellite, but in the confines of the harbour they must rely on visibility, even with experienced pilots on board.

Higher than normal sea temperatures off Nova Scotia are to blame for the fog, but some pleasant onshore breezes coupled with rising tides bring the fog into the harbour, reducing visibility to a few yards at worst.

Two large container ships, one outbound and one inbound for Cerescorp's terminal at Fairview Cove were delayed by the arrival of the fog. 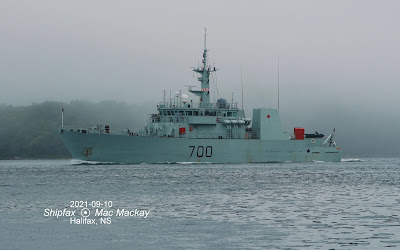 HMCS Kingston slides out of the fog. 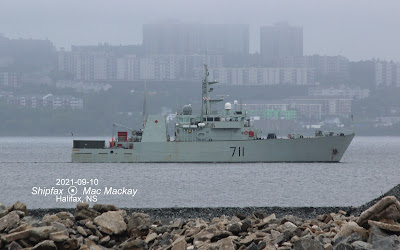 Canadian naval vessels are painted the same colour as Halifax fog, but become more visible in clear conditions. HMCS Summerside once into the Basin stood out from the shoreline.

Hyundai Faith the largest of the ships to navigate through the Narrows of Halifax harbour was able to enter port early in the morning when visibility was still tolerable. However by the time the ship was ready to sail, conditions had deteriorated significantly. At the pilot's discretion, the ship went to anchor in Bedford Basin until conditions improved. 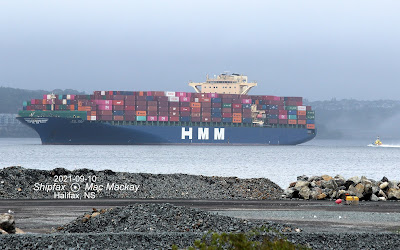 The pilot boat Scotia Pilot heads out to disembark the pilot from the Hyundai Faith. The ship moved off the dock and anchored in Bedford Basin to await clearing in the Narrows. (The Basin was much clearer).

The inbound Hella opted to anchor in the lower harbour. It was able to get underway again by mid-afternoon and berth safely at Fairview Cove. Hyundai Faith, by then requiring tug assistance to turn and get underway sailed as soon as the tugs were freed up from the Hella. 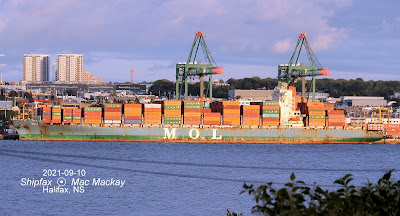 Built in 2011 by Hyundai Samho the Hella is a 59,307 gt, 71,429 dwt ship with a capacity of 5100 TEU (some sources say 5605 TEU). It carried the name MOL Gateway until July of this year, presumably on a ten year charter.  Owners B. Schulte (Peter Doehle managers), renamed the ship on completion of that charter but the ship has not been repainted. It may now be on charter to HAPAG-Lloyd, but is nevertheless operating on THE Alliance's service, but is unscheduled, perhaps picking up empties? 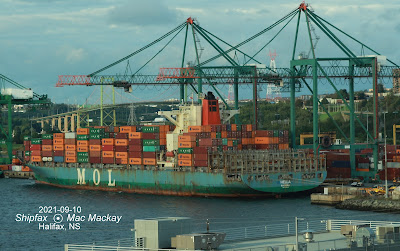 Bright sunshine bathed the port in the late afternoon as the fog gradually retreated offshore.

The tug Atlantic Fir accompanied the Hyundai Faith through the Narrows, and has just been released to return to base. 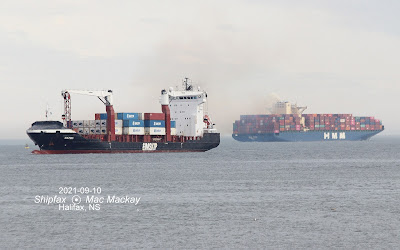 The arriving Selfoss took the western channel inbound, allowing Hyundai Faith to take the straighter eastern channel as it made its way out. It was soon swallowed up in the fog. Its exhaust gas scrubber was emitting a constant stream of water vapour unto the near 100% relative humidity ambient air.
Selfoss serves Eimskip, the Iceland shipping company on its Green Line between Iceland and Portland, ME via Halifax, Argentia (and St.Anthony on demand). By comparison it has a TEU capacity of 698. Many of those are reefers as fish is the primary export from Iceland and perishables a major import.
Built by Fujian Mawei Shipbuilding Co, Fuzhou, China in 2008, as Sophia, the ship was acquired and renamed by Eimskip in 2017. It has two 40 tonne SWL cranes.

HMCS Moncton wearing its commemorative Battle of the Atlantic disruptive paint scheme, could not deceive anyone by its presence in Bedford Basin in the early evening. When fog was well offshore,the setting sun was blazing down on the ship. 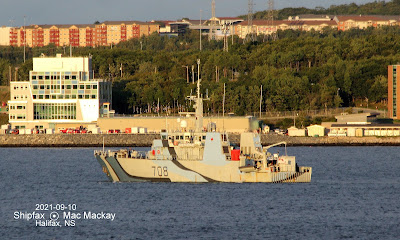 HMCS Moncton anchored in Bedford Basin with the CCG headquarters building the the background (adjacent to the Bedford Institute to the right).