Another visiting naval vessel arrived this morning in advance of Operation  Cutlass Fury 2021. FS Aquitaine D-650 is no stranger to Halifax, as it made a call here on its first long cruise. Following commissioning in 2012, it arrived in Halifax in April 2013. 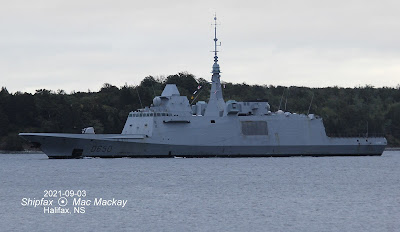 A European multi-purpose frigate, its design has been adopted by numerous countries even including a variation for the United States. Naturally Canada has not adopted the Fincantieri product preferring to stand alone (and spend more...?).