A major military exercise will be held over the next two weeks off Halifax. NATO Allies the US, the UK and France will be working with the RCN beginning September 6 about 50 to 100 miles southeast of Halifax. The plan is to simulate surveillance and boarding of a civilian ship and will include operations with the Canadian submarine HMCS Windsor. Other RCN ships likely to be involved are HMCS Montreal and Toronto, which have been working off Halifax for the past few weeks.

The first of the Allied ships to visit Halifax is USS Forrest Sherman DDG-98 an Arleigh Burke class guided missile destroyer, arriving this morning September 2. Launched in 2006 by Ingalls, Pascagoula, it was commissioned in 2006 and is based in Norfolk, VA. 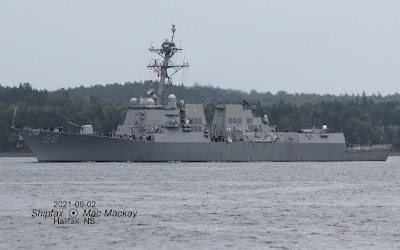 The operation will start September 6 at 1300 hrs with a flyover of CH-148 Cyclone, CP-140 Aurora and Alpha jets. The Halifax Regional Municipality consented to a 500 foot altitude for the flights.

Weather permitting, I will post new reports as ships arrive or sail, as post tropical storm Ida is on its way past Nova Scotia. The exercise is due to be completed by September 17.