Over the past few years the Mediterranean Shipping Company (MSC) has been on a major ship buying spree. The company already had the second largest container ship fleet in the world, but with an estimated capacity of more than 4 million TEU it is within 106,000 TEU of overtaking Maersk - long the largest operator.

Although MSC has more than 40 new ships on order, totaling 720,000 TEU, it is not content to wait until 2022 to take delivery from the shipyards. Instead it is "hoovering" up ships at an incredible rate - buying ships sight unseen, ships that are already on charter to other lines, and older ships at well above market price estimates. Even ships from the Chinese domestic trade, which normally are never sold on have gone for record prices.

Shipping companies are making massive profits these days, so MSC apparently feels it can afford this daring program. It has already doubled its fleet size in the last eight years, but buying some seventy ships of more than 300,000 TEU in the last year alone is quite startling. MSC has also been noted over the years for operating older ships than average, so buying up "used" ships seemingly does not worry them.

Today, September 12, marked the arrival in Halifax of one of these "used" ships, which joined the MSC fleet this summer. Built in 2004 by Hanjin Heavy Industry and Construction Co, Ulsan it is typical of the older tonnage, which was once thought to be unprofitable to operated. The 54,214 gt, 68,150 dwt ship, with a capacity of 5060 TEU, including 454 reefers, started life on charter to Maersk as Maersk Douala. It called in Halifax under that name in the same year. In 2009 it became Charlotte C. Rickmers in 2014 and was renamed Charlotte briefly the same year before becoming Augusta Kontor. It called in Halifax regularly under than name in 2014 and 2015 under charter to HAPAG-Lloyd. 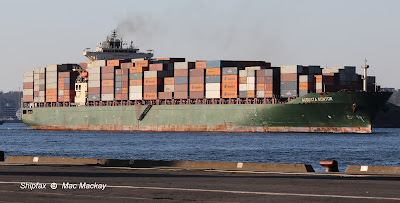 Augusta Kontor outbound from Halifax May 14, 2015 on charter to HAPAG-Lloyd.

In 2017 the ship was renamed again as August then Long Chang then Zhong Gu Zhe Jiang. It would nornmally have remained in Chinese domestic trade until the end of its useful life, but instead it was swept up in the buying spree.

MSC renamed the ship Maersk Maria Clara effective June 1, 2021 and the ship has now taken up a slot in one of MSC's North American routes. After clearing the Canadian Food Inspection Agency's examination for Limantra Dispar the ship left for Montreal. One interesting note - the ship sailed from Liverpool September 25 and arrived in Canada via the Strait of Belle Isle, but had to to divert all the way down the west coast of Newfoundland and the Cabot Strait to Halifax for CFIA clearance. It may have chosen the northern great circle route to stay north of Hurricane Larry, but it was still a long detour. 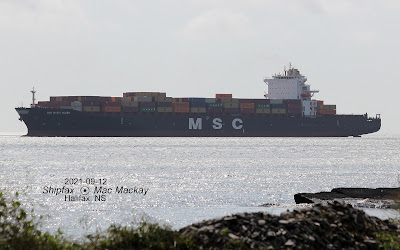