MSC Weser - here for a time

The Mediterranean Shipping Company has four scheduled routes that call at eastern Canadian ports, and I hear there will be a fifth added soon. The four present routes all have Montreal as the terminal port, and only the Canada Express 1 and Canada Express 2 service have scheduled calls in Halifax. Those calls were initially lightering/top off calls because of St.Lawrence River draft restrictions, but now have become "paying" as local cargo is handled as well as train/truck express cargo.

Today's arrival of MSC Weser is not a regular call since MSC's Canada Gulf Bridge service from Montreal to the Gulf of Mexico normally calls in Corner Brook and Saint John, NB southbound, but not Halifax. Instead MSC Weser is northbound, after sailing from Altamira (August 19), Progresso (August 24), Freeport (August 29) and Philadelphia (September 2). 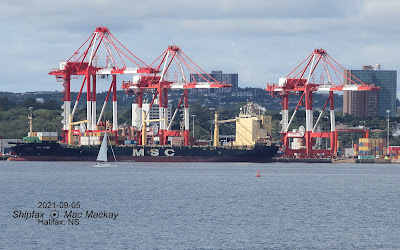 After working cargo today the ship will move to a layup pier. Its scheduled arrival in Montreal has been changed from September 13 to October 9 for some reason  (likely a blanked sailing due to the Labour Day holiday weekend), so the ship will be here for a while.
Built in 2001 by Kvaerner Warnow Werft in Warnemunde to a CV2500 standard design, it is a 26,106 gt, 33,691 dwt vessel with a capacity of 2524 TEU including 400 reefers. It also carries three 40 tonne capacity cranes. Although it was launched as Wehr Weser it was delivered as Libra New York and carried that name until 2009 when it became Weher Weser again. It became MSC Weser in 2016.
The fifth MSC service, is believed to be the Indus 2, running from northwest India with calls in Italy and Portugal to the US east coast. Details have not been announced officially, but is expected to bring a significant amount of cargo to Halifax. MSC also operates the Indus Express and Indusa services all from Mundra with various ports of call en route to the USA. The three services are also known as the IPAK US services.
.
Posted by Mac at 5:55 PM