Two ships arrived in Halifax September 13 wearing new names. Both ships have been calling in Halifax for some time under their previous names, so they are familiar to the port.

First to arrive was the Netherlands flag Trinitas arriving from Cuba for Nirint Shipping BV. The ship was a regular in Halifax under the name Hollandia with cargoes of nickel sulfide from Moa, Cuba as back haul cargo on Nirint's Netherlands and Spain to Cuba container and generals service. 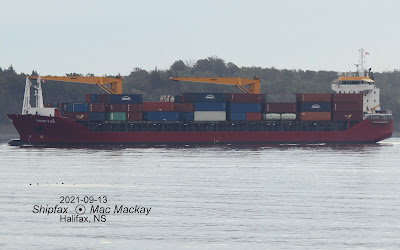 Built as Trinitas in 2007, with the hull by Damen Okean, Mykolayiv and completed by Damen Hoogezand, Foxhol, the ship was delivered as Nirint Hollandia. It was renamed Hollandia in 2012, but remained on Nirint service. It started to call in Halifax in 2014.
It is a 8,999 gt, 12,016 dwt vessel with a container capacity of 684 TEU, including 80 reefer plugs on deck. It uses a pair of 80 tonne SWL cranes to handle cargo, which in the case of the nickel concentrates is in bulk bags. It has movable tween decks and ventilated box shaped holds, so is an adaptable multi-purpose vessel capable of carrying bulk cargoes.
The ship was renamed Trinitas again in 2019, but had not called in Halifax under that name until now. Normally a name change while under charter indicates a change of owners, but this ship is still owned by a single ship company called JW Danser + PJ Danser of Delfzijl, Netherlands and managed by Wagenborg. The ship is not shown on future Nirint schedules so may be reassigned soon.
The second renamed ship is now called Vivienne Sheri D. While still carrying the Antigua and Barbuda flag, it has reportedly been sold to the Doornekamp Shipping of Odessa, ON. They have just started a container service from Europe to the Great Lakes and will include a feeder service out of Halifax. Their first ship Peyton Lynn C is currently on the Great Lakes after inaugurating a service with Spliethoff's Cleveland-Europe Express. The ship will also call at Doornekamp's home port of Picton, ON. Its calls here in Halifax will more likely be in the winter when the Seaway is closed to traffic. 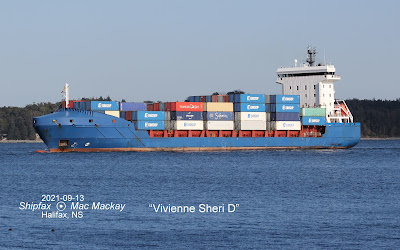 Vivienne Sheri D has been so recently renamed that it has no name on the bows yet (too difficult to reach I guess) but only on the stern. A 10,905 gt vessel built in 2009 by Naval Gijon, Spain, it measures 12,640 dwt with a container capacity of 925 TEU including 200 reefers. Classed as a container feeder it has no cargo cranes.
Better known as Pictor J until 2020 and Pictor since earlier this year, it has been working on Eimskip's Green Line from Reykjavik, Argentia, Halifax, Portland, Maine and return since 2019. Eimskip also operates the ship as a New England feeder for such lines as CMA CGM. That may be supplemented by Doornekamp's feeder service.

According to media reports Doornekamp will keep the ship on the Eimskip charter for up to two years, but plan to place it on the Cleveland-Europe Express eventually.