Big Arrival, Not so big Departure 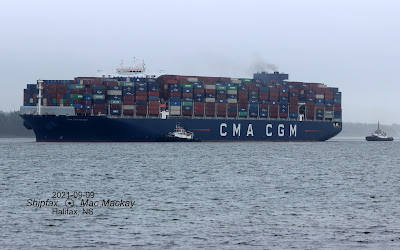 With Atlantic Fir forward and Atlantic Beaver aft, the ship makes ready to turn off PSA Halifax and back into the berth. (It is amazing what a camera can see with a little computer magic).
Built in 2019 by Hyundai, Samho, CMA CGM Mexico is a 149,314 gt, 157,076 dwt vessel. It appears to be almost fully loaded to its 15,000+TEU capacity. The ship is only slightly smaller than the 16,000+ TEU Explorer class, such as CMA CGM Marco Polo, the largest ship to call in Halifax.
The camera also helped to improve visibility of another ship, which I was lucky to see at all as it sailed into the fog and rain. 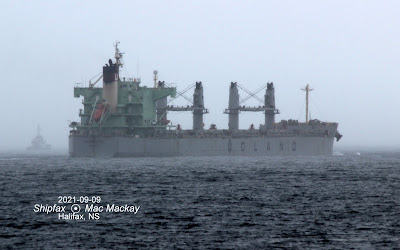 Isabelita is a 32,297 gt, 58,470 dwt bulker, built in 2010 by Tsuneishi Daishan, and equipped with four cranes. It is owned by the Ugland company and is carried on the Norwegian International register. (Ugland is well known name in Canada as a partner in managing several tugs, tankers and bulkers through Canship Ugland. Since 1997 the joint venture between the J.J.Ugland Companies and Knutsen OAS shipping, both from Norway, has been based in Newfoundland.)
The Isabelita was in port for only a few hours, perhaps for a Canadian Food Inspection Agency certification. Its last port, Nemrut, Turkey, is noted for its fertilizer exports. The ship also made a brief stop in Greece, but only at an offshore anchorage. It is bound for Quebec.
.