Where are the ships - Part 3

The container ships that had been anchored off Halifax, came in to port today, September 22, one each for PSA Halifax and Cerescorp, Fairview Cove.[ See previous post.]

First in at an early hour this morning was Conti Contessa tying up at Fairview Cove on THE Alliance's EC5 service. 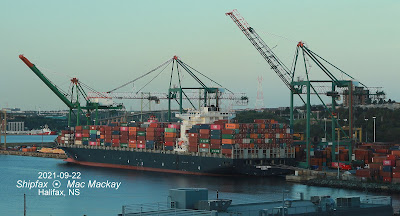 Late in the afternoon it was time for MSC Shristi for PSA Halifax. Atlantic Fir came alongside first to push the ship's turn, with Atlantic Oak standing by to come alongside near the ship's starboard bow. Interestingly the ship used the Western / Deep Water channel, which the pilot referred to as the "Main Channel" when communicating with a sail boat.

The ship anchored off Halifax September 19 en route from New York to Montreal. It still does not show on Montreal schedules and PSA Halifax gives it a voyage number XA135A, which may mean that it is an "extra loader" - not scheduled and just here to pick up or redistribute empties. On the other hand it may be here just to lighten its load to meet St.Lawrence River draft restrictions.
Rock On
Gypsum Integrity arrived at sunset this evening, making an interesting sight as it approached the MacKay bridge, with the tug Atlantic Beaver Bear en route to Gold Bond to load gypsum (rock). 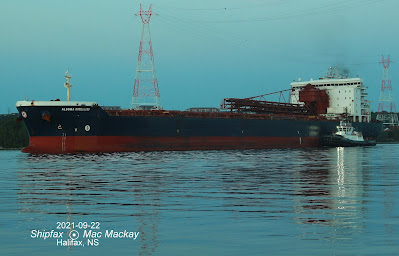