Today (September 27) saw the first of several unscheduled container ships to call over the next weeks. These ships have been brought in to deal with delays in  other ports (meaning ships cannot meet schedules), accumulations of empty containers, and a high demand for westbound transatlantic freight from northern Europe.

Cape Corfu is an almost brand new ship, that just entered service at the end of June when it was delivered by Guangzhou Wenchong. Cape Shipping SA (based in Greece) had a moderate sized fleet of bulkers, but for some reason decided, as far back as 2015, decided to order some container ships. That seems to have paid off incredibly well as current demand for ships is extraordinary, and westbound transatlantic freight rates have nearly doubled in the past year. 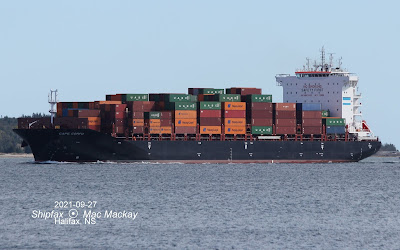 The 31,22 gt, 37,025 dwt ship has a capacity of 2756 TEU, which would have been considered uneconomical, except as a feeder ships, until this year.
The ship displays lots of strange hieroglyphics on the hull - most of which may be worn off by contact with tugs. For the time being however they mark hull station lines, bulkhead locations and stacking instruction symbols for container loading. Others marks - including the staggered "o" and "oo"s are a mystery. (They may apply to various positions of the pilot ladder.) 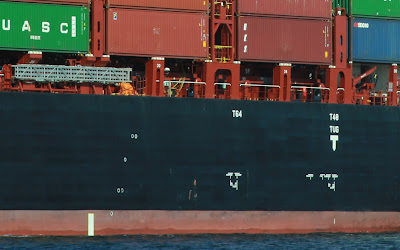 Another notable feature is the cell guide / lashing frames on deck. This is a relatively new feature on the main deck of container ships, and may be a welcome response to many incidents involving boxes lost at sea, particularly in the Pacific. It also apparently allows for an increase in the height of boxes stacked on deck. Few ships of this size would carry six high boxes - even amidships. Due to the fine lines of the ship fore and aft I would therefore be concerned about parametric rolling, and extra lashings would be good idea! [see footnote] 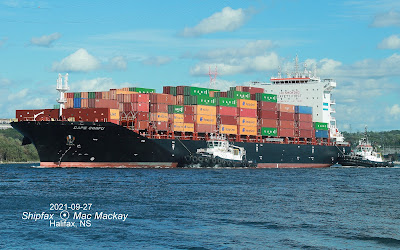 From the look of the containers, the ship is working for THE Alliance, and more than likely for partner HAPAG-Lloyd, but is not necessarily following one of the regular routes. It is sailing from Rotterdam, but its next port has not been posted yet. 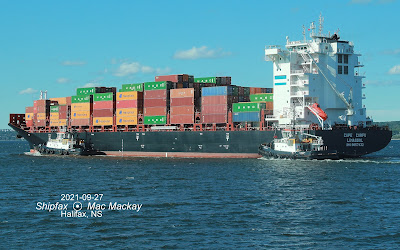 The ship does not have stowage or holds aft of the superstructure. The poop deck is given over to the free fall lifeboat and a huge Masada brand provisions / stores crane (Jiangsu Masada Ship Machinery Co Ltd, licensed to use Mitsubishi crane technology).
It appears that the ship is equipped with an exhaust gas scrubber system and only a very small shroud around the exhaust stacks - too small to be called a funnel. Instead the ship displays a blue over white over blue painted panel on the side of the house for the company colours.
.

I have been accused of being too technical, but for those who are interested, here is a good explanation of parametric rolling: https://www.wartsila.com/encyclopedia/term/parametric-rolling