Shipping containers don't have to talk to tell stories. This morning's arrival (September 25) of the ship NYK Constellation is a moving history of several developments in the shipping world. 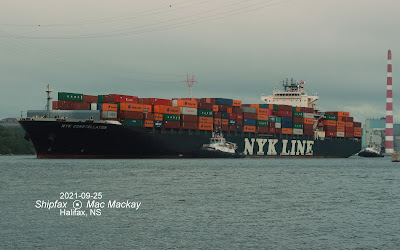 NYK Constellation is still owned by NYK Lines, but NYK is one of the founding companies, along with MOL and K Line of ONE, Ocean Network Express.  Containers from each of the component companies will still be seen for years to come. As new containers are delivered, they will be marked for ONE in the vibrant magenta colour chosen by the line. ONE was formed to ensure that Japan had a larger presence in the shipping world as other lines were consolidating and growing larger and more competitive. Their containers (and ships) certainly stand out. 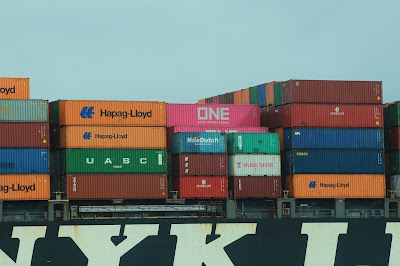 NYK Constellation is sailing for THE Alliance on its AL5 service. THE Alliance members are HAPAG-Lloyd, Yang Ming and HMM and therefore it is not surprising to see HAPAG-Lloyd boxes. However it may not be as obvious that the UASC (United Arab Shipping Company) boxes share a common ownership. UASC merged with H-L in 2016 and has since been absorbed by H-L. Ironically UASC is the largest shareholder in H-L. UASC was majority owned by the governments of Qatar (51%), Saudi Arabia (35%), Kuwait and the United Arab Emirates at the time of the merger.

A more recent acquisition by H-L is NileDutch, just purchased in March of this year. A line with a strong presence in West Africa, it operated ten liner services, which will now presumably be merged into H-L. It was a rare sight to see a NileDutch (light blue) container today.

The large number of other containers on view include those of the many container leasing and logistic companies, too numerous to expand upon, such as UES, Magellan, Chronos, Florens (which has included Dong Fang since 2016), TEX, CAI and Beacon. Also of note is Seaco Global,  indirectly owned through Global Sea Containers by Bohai Leasing in turn controlled by the now bankrupt HNA Group. The latter was a huge Chinese based publicly traded financing and investment company.

Some containers are virtually anonymous, with perhaps only a small logo as identity (in addition to the unique reporting marks that all containers are required to carry.) Many however carry the name in very large scale, particularly if the box belongs to a shipping company. Even then, very little other information is usually provided. 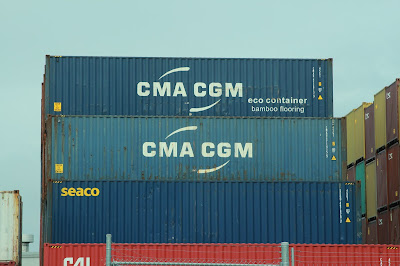 CMA CGM may have been among the first to take advantage of a little more free advertising space when it proclaimed that its "eco containers" had bamboo flooring. (A fast growing and supposedly environmentally friendly material.)

I have noted previously that ZIM has taken the next steps by promoting is "ZIMonitor" box tracking system for its temperature controlled boxes, and the "Z Factor" on its dry cans. 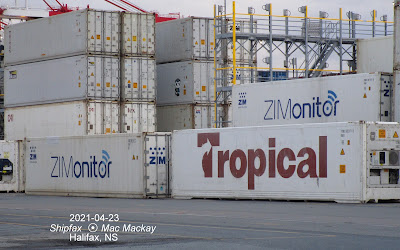 Now however ZIM appears to have upped the ante in a game I do not approve of. They have apparently now taken to using their boxes to advertise others. 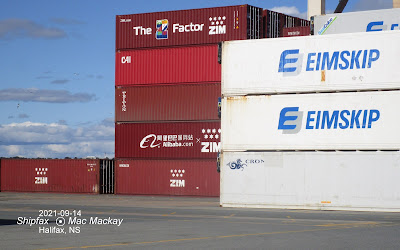 Alibaba, another of those gigantic and scary conglomerates, under Chinese government influence, may be the first to advertise on shipping containers, but I hope it is also the last. I do not need to see ships looking like floating hockey rinks with the boards plastered with advertising. (I'm still boycotting the NHL for that one).

Yes I have become a curmudgeon (in this matter anyway) and an unrepentant one.

And lastly - all containers are not freight containers - witness this one spotted in August on the ship Aristomenis. 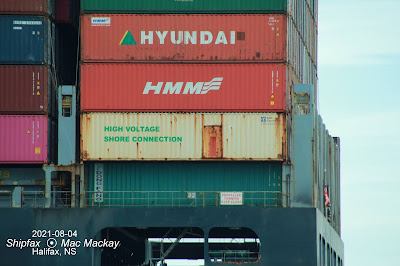 The Port of Halifax has shore power available for cruise ships, but so far at least, not for container ships, but that should be possible. Ships still use a lot of power while docked, particularly if they are carrying reefer containers. Exhaust gas from the ships' diesel generators is a notable polluter.
(Another incidental story: HMM is the "new" name of Hyundai Merchant Marine, which it was adopted when the company was reorganized to stave off financial collapse.)
Some ACL ships also carry lab containers that are fitted out with water sampling and other measurement devices for ocean science, in association with Dalhousie University. ACL should have lots of room for labtainers, at least on its eastbound trips, if the very vacant looking Atlantic Sun is any indicator. 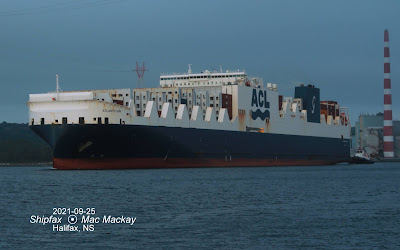 On its arrival from Norfolk this evening on its eastbound leg, hardly a container was visible on deck forward. Export cargo from the US must be at an all time low.
.