Where are the Ships?

I am not a shipping analyst - merely a ship watcher, but I cannot help but notice that there have been very few container ships in port lately. In fact during the past week (September 12 to 19) Cerescorp has handled only two ships for THE Alliance and three ACL ships. PSA Halifax handled no ZIM ships (a feeder is due September 20), no Tropical Shipping ship (one is due September 20), two Maersk/CMA CGM  transatlantic ships, but no CGM long haul ships, one Eimskip ship (two calls - one westbound and one eastbound) and three MSC ships.

So aside from strictly transatlantic ships and North American routes, there was very little activity. Shipping lines have "blanked" sailings because the ships are not available. Some 65 ships are anchored or drifting off Los Angeles / Long Beach, California and other west coast ports are experiencing delays.

Shipping lines are therefore diverting ships from their regular routes and sending them to the Pacific in hopes of keeping up with demand (and making more money). However LALB, for instance, is working to capacity and cannot increase throughput even if there is demand.

Therefore we are seeing fewer ships in Halifax since they are either delayed in the transpacific legs of their trips or they are being taken off Asia /Europe or transatlantic routes and sent to the Pacific. 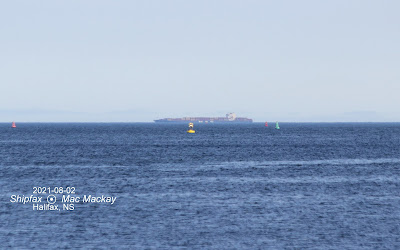 MSC for instance has recently transferred MSC Anya to the Pacific. It has been a regular on one of MSC's Canadian services. MSC has also acquired more ships so will likely make up the difference. Of more concern are ZIM, THE Alliance and CMA CGM whose absence will surely reduce Halifax's annual cargo figures substantially.

In the next few days we will begin to see some "extra loaders". These are unscheduled ships spot chartered or diverted slightly from other routes, to deal with delayed cargo or to pick up desperately needed empties to send back to Asia.

And an almost footnote is the reduction in automobile imports due to a shortage of computer chips. Again it is difficult to measure the reduction in cars carried per trip, since the auto carriers continue to come to Halifax from Europe, but all automakers worldwide are experiencing production issues due to the dearth of chips.

WW's Torino moving from Pier 31 to Autoport today (September 18) has some cars on board despite the chip shortage.

So far traffic from Asia has not been diverted in significant number to Suez/Med/Atlantic or Panama/ East Coast but it may happen as cargo shippers grow frustrated with delays. In the meantime we will be seeing fewer container ships in Halifax, but some unusual ones too.