The trawler Primo, a fixture on the Lunenburg waterfront for many years, and which sank at its berth during a storm February 7-8, 2021, has been hauled out on the Lunenburg Foundry and Engineering marine slipway. 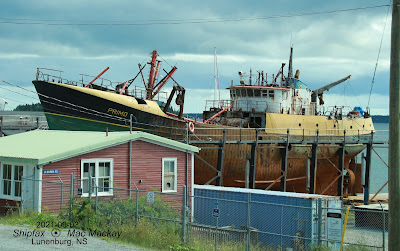 With its masts cut down, the vessel was raised, but its fate was not clear. There was hope that the vessel could be sold, even in damaged condition, for future use. Owners Dawson Moreland and Associates Ship Riggers Ltd had orginally hoped to convert the vessel to auxiliary sail for trading in the Pacific, but that fell through several years ago and no buyers could be found. It was while lying idle last winter when it is assumed a hull fitting failed and it settled on the bottom. The vessel was insured according to press reports, but it seems unlikely that repairs would make economic sense if no buyers can be found.

I covered the ship's history in a previous post in February: Primo sinks

Built by George T. Davie + Co Ltd of Lauzon, QC as a side trawler during the trawler building boom of the 1960s (say goodbye to the cod), it was later converted to a scallop dragger and was last employed by Clearwater.