White and Bright at Foundation

Perhaps not what you were expecting from the title (no it is not a refrigerator) the Super Yacht My Lady arrived in Halifax September 12 from the Newport, RI area and tied up at the Foundation Dock*. 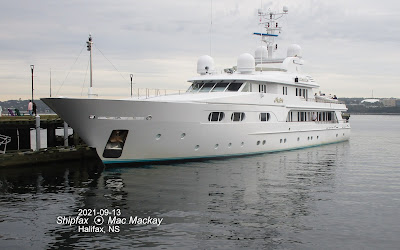 As with most yachts of this class it has many other features some of which are summarized at:

* The Foundation Dock is the name applied to a newly built pier. It is in the same location as the pier used by the legendary tug and salvage company Foundation Maritime and its successors MIL Tug, Eastern Canada Towing Ltd (ECTUG) and Svitzer Canada. The pier is lined with floating stages (seasonally) and is part of a redeveloped board walk and wharf area completed earlier this summer. It has now been re-purposed to cater to pleasure craft and tour boats exclusively.

The area is quite unrecognizable from its Foundation Maritime days as this late 1950s or early 1960 photo shows: 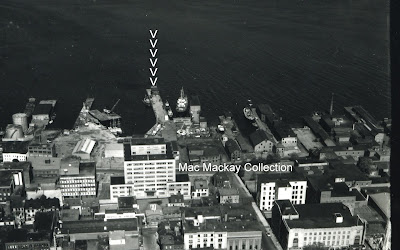 White arrows point to the old Foundation pier. The eight storey white building in the centre mid ground is the Ralston building, also demolished in the past year. The large graveled area in the photo below is its former site. 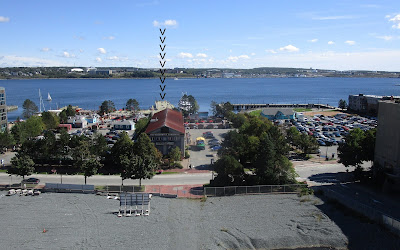 My Lady, partly concealed by a tree, at the Foundation wharf, 2021 version.
The black arrows point to the same location as the white arrows in the upper photo.
The intersection of Lower Water Street and Salter Street at far right in the colour photo is under the watermark in the black and white photo.
.