There were several arrivals and departures in Halifax today, September 8, with the usual mix of different ship types. Among them were:

The auto carrier Tirranna made a double call - a morning visit to Autoport to unload cars then a noon time move to Pier 31.

Backing in to Pier 31, the ship shows off its Wallenius Wilhelmsen colour scheme, which is quite different form its traditional Wilhelmsen orange which it wore on a previous visit January 14, 2018

It may be my imagination, but some of that orange may be showing through the blue on the lower part of the hull, particularly toward the stern. The ship appears to have discharged one heavy piece of machinery at Pier 31 before sailing in the early afternoon for New York.

The bulk carrier Manzanillo arrived for Pier 27-28 to load bulk cargo of wood pellets. Built by SPP Shipbuilding Co in Tongyeong, Korea in 2010 it is a 23,456gt, 34,426 dwt vessel with four cranes.

The ship arrived from Sorel, QC, where it discharged a cargo of ilmenite (titanium ore) from Madagascar. Rio Tinto Fer et Titane (former QIT Quebec Iron and Titanium) has a mine at Lac Allard, QC and sends the ilmentite by rail to Havre-St-Pierre, then by domestic ships to its smelter in Sorel. However due to seasonal shutdowns, labour and other costs, the company also sources ilmenite from its large mine near Ehoala, Madagascar. The low operating cost and huge deposit of the material there pose a threat to the Canadian mine in the long term. 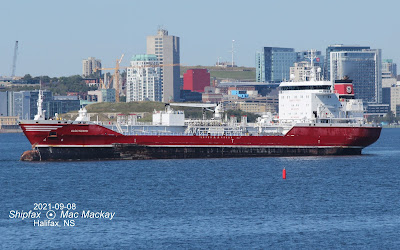 The Tuzla, Turkey built tanker carried the name Gan-Gesture from launch in 2008 until 2009 when it became Ramira. Algoma Tankers acquired and renamed the ship in 2018. As expected its attractive red hull with white stripe has not stood up well to the constant abrasion from locking through the St.Lawrence Seaway system. It will likely be repainted in the more serviceable Algoma dark blue at its next drydocking. Its modest size of 12,164 gt, 16,979 dwt make it ideal for servicing smaller ports with reasonable quantities of cargo.
.