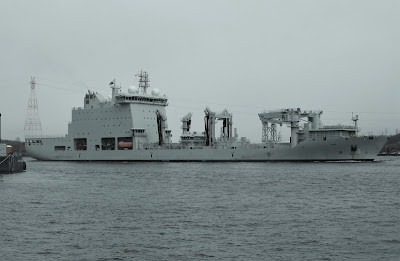 Asterix outbound in the Narrows this morning.The elaborate derrick systems permit the ship to carry out refueling and replenishment at sea.

As the name implies, the Naval Ammunition Depot (NAD) also known as the Bedford Magazine, is the storage facility for the RCN's ordnance. Presumably the ship stocked up so as to be able to re-supply Canada's warships when they are far away from their home port. In addition to ammunition the Asterix also carries the other supplies that ships need, including fuel and consumables. It can also serve as a spare parts and repair facility and has a large medical ward.

In the lower harbour, the ship heads for sea.

Unique among Canadian naval vessels, the Asterix is privately owned and operated by a civilian crew with naval specialists on board for specific missions. The ship is normally unarmed itself and has limited combat damage control.