Two Canadian ships have been sold to foreign buyers recently. Both were operated by affiliates of Transport Desgagnés and they have Halifax connections - one more so than the other.

The most recent sale is the tanker Maria Desgagnés which has been laid up in Montreal since October 25, 2021. Having passed 20 years of age, the ship was considered a liability by the major oil companies, and was restricted from loading at their facilities or carrying their products.

Earlier this year it was renamed Maria and its Canadian registration was closed March 3. On March 9 the new name of Aram Khachaturian appeared and the ship was reported sold to so far unknown Georgian owners, and registered in Panama. The close ties between the country of Georgia and Russia (and the namesake's similar close ties to the USSR, despite Armenian ancestry) have raised questions about Russian involvement - directly or indirectly. 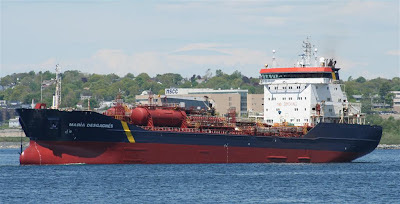 Maria Desgagnés was an infrequent caller in Halifax, usually carrying refined products from the Valero refinery in Lévis, Quebec. Built in 1998 by Qiuxin, Shanghai as Kilchem Asia it was acquired by Transport Desgagnés when the first owners, Kil Shipping of Denmark, defaulted on the construction contract and shipyard sold the ship in early 1999. It is a double hulled chemical/product  tanker of 8848 gross tons, 14,335 deadweight and was built to LR Ice Class 1A. It made regular trips to the north to refuel arctic outposts. The ship was sub-chartered to the Desgagnés tanker subsidiary PetroNav Inc. So far no sailing date has been posted.

Although not seen in Halifax for many years the small passenger / cargo ship Nordik Express was once based here and was rebuilt here.

The ship was built in 1974 as Theriot Offshore IV by Todd Pacific in Seattle as one of a series of six numbered offshore suppliers of 1258 gt. It had a large open cargo deck and below deck tanks for cement, drilling mud, pot water, fuel and other materials. In 1977 the ship was renamed Scotoil 4. In 1979 the newly established Secunda Marine Services of Dartmouth, NS acquired the vessel (and its five sister craft) through J.Ray McDermott, and renamed it Tartan Sea.

As Secunda grew it needed more sophisticated and modern suppliers and it sold off five of the Theriot boats, which were converted for fishing by new owners. However Secunda found another use for the Tartan Sea and converted it to a passenger / cargo ship in 1987. The work was mostly done at the Woodside dock in Dartmouth. Secunda signed a five year contract with the Quebec Minister of Transport to use the ship for seasonal service to a dozen or more isolated communities on the lower north shore of the Gulf of St.Lawrence between Sept-Iles and Blanc Sablon on the Labrador border. With the conversion it had facilities for deck and cabin passengers and 1300 tonnes of freight. Operating from Rimouski they also called in Port Menier, Anticosti Island. The ship, now measuring 1619 gt, and fitted with a 35 tonne capacity cargo crane, was renamed  Nordik Express. 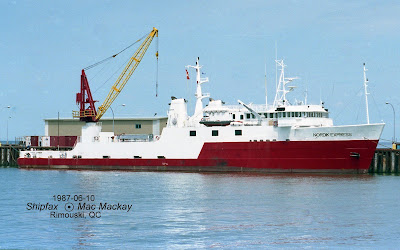 At the end of the 1987 season Secunda sold the ship, and contract, to a Transport Desgagnés affiliate called Relais Nordique. Although the ship was ice rated, it initially did not operate between January and April. 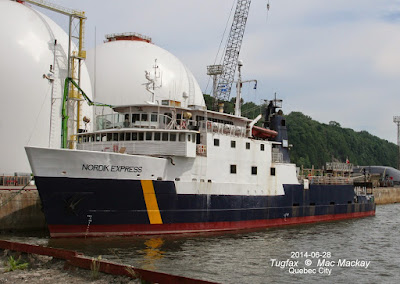 The ship retained the name but was repainted in Desgagnés colours. In 2001 further modifications included an upper deck lounge and more cabins. Passenger capacity was then rated at 268 with 72 cabins and container capacity was 60 TEU.

A serious grounding in Harrington Harbour in 2007 resulted in extensive bottom repairs, which likely extended the life of the ship.

Nordik Express continued the service until  2013 when a new ship, Bella Desgagnés was delivered See Shipfax April 9, 2013 Even then however, teething problems with the new ship saw the Nordik Express brought back out of well earned retirement as a substitute and back-up. 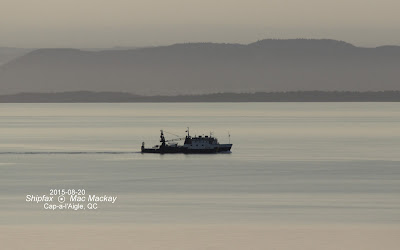 The ship was effectively laid up for five years in Quebec City, until January 2021 when it was again pressed into service temporarily, under Transport Canada exemption, when the Bella had engine trouble. Nordik Express sailed out of Sept-Iles to carry 45 containers of much needed supplies to the outports. However to return to regular service, the ship would have needed extensive hull work, which the owners felt was not warranted for a ship of its age and it went back into layup and listed for sale.

In January of this year it was sold to Dominican Republic owners who renamed the ship RD Express. After some refit work it sailed from Quebec City on March 18 but an engine failure caused the ship to return to port where the crew made repairs. (It has two V-20 GM's totaling 7200 bhp). It then sailed March 22, for Santo Domingo where it is expected to take up a passenger / freight service with Puerto Rico.

As a bit of a footnote the small 40 ft. long tug/workboat Flo-Mac, dating from 1960 was also sold to Dominican owners and left Quebec as deck cargo on the RD Express. The tug's name is an abbreviation of Florence Mary McKeil (1938-2007), wife of Evans McKeil, original owner of the tug and founder of McKeil Workboats - now McKeil Marine. Another tug, the Florence M and a bulk carrier Florence Spirit still carry Mrs.McKeil's name.