Ships arrive and depart regularly from Halifax harbour, but due to the tight channels and restricted space in some parts of the main harbour careful orchestration is sometimes needed to keep ships safely apart. With all the comings and goings today, March 30, the harbour pilots had to do something that is rarely seen. With two ships wanting to be in the same place at about the same time, one of the ships took an unusual route.

The arriving ship was the MSC Antigua on MSC's Indus 2 route from the mid-east and Indian sub continent. At this time of the year ships coming from that region must be inspected for the larva of a particular invasive species, namely Lymantria dispar asiatica, the LDA moth, formerly known as the Asian gypsy moth. The Canadian Food Inspection Agency (CFIA) conducts the inspection while the ship is at anchor and before it berths. [The word "gypsy" was considered to be demeaning and was eliminated.] 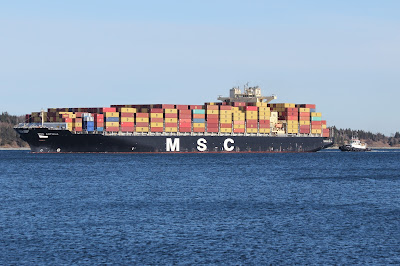 Due to its size, MSC Antigua was directed to anchorage number one, which is usually reserved for large ships and for short duration stays. It is also immediately off the PSA terminal, the ultimate destination of the ship once it has been cleared by the CFIA, and the berth is clear tomorrow morning. (PSA Halifax was all out today handling MSC Tamara and Tropic Hope).

While the MSC Antigua was arriving the autocarrier Lake Wanaka was getting underway from Autoport. Its usual route would take it directly through number one anchoraage. To avoid any risk of close quarters, the ship continued from Eastern Passage east of George's Island, then turning north of the island passed outbound to the west of George's. 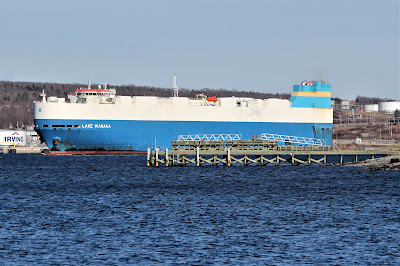 It is unusual to see an autocarrier in this part of the harbour, passing the George's Island jetty, with its gangways stowed for the winter. 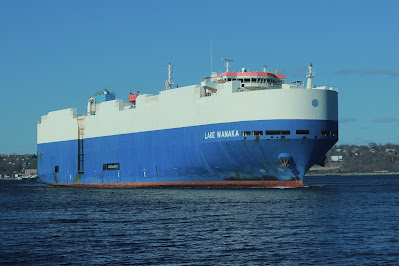 It is also rare to get a close up view of an autocarrier from the Halifax side of the harbour.
Built in 2008 by Xiamen Shipbuilding Industry Co in Xiamen,as the Triumph, it was renamed (for a New Zealand lake) in 2019. The 46,800 gt, 12,272 dwt ship has a capacity for 4,902 autos, making it one of the smaller "car boats" and not a regular. Its last ports were in Spain, Morocco and Germany and its next port is given as Veracruz, Mexico, also not a usual destination.

As the ship passed Pier 20, MSC Antigua was just coming to anchor. It is worth noting that both ships have been retrofitted with exhaust gas scrubbers, contained in huge boxes, much large than a normal funnel. 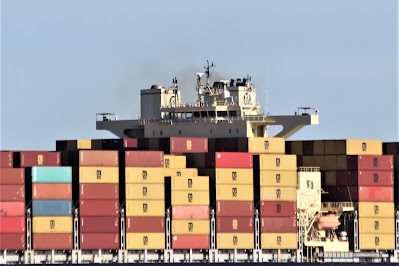 Later in the afternoon it was clear going for two other departures. SD Victoria, the Royal Navy support ship, has been in port since February 10. It destination was given as its home port of Portsmouth, UK. See previous post: February 10 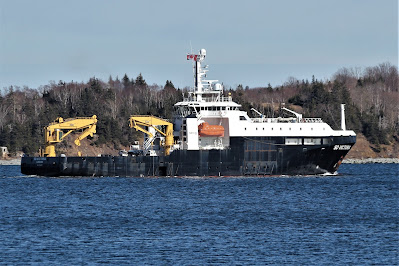 The last departure that I observed was that of the Ruby Confidence. It arrived from Baltimore March 25, and loaded wood pellets at Pier 28 [ see previous post March 26]. It departed for Sudstrup, Denmark, the location of a large power plant fueled by biomass. 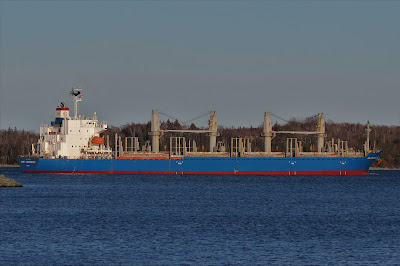 The stanchions to secure deck cargoes of timber are easier to see in this photo.
.