With events in Europe unfolding as they are, one has to wonder how much longer Canadian oil companies will be able to import refined product from Europe. Shortages of fuel are predicted in the medium term as supplies of Russian crude are blocked. Demand in Europe will likely lead to even more increases in prices for gasoline, diesel fuel and furnace oil.

Fuel users in Canada will suffer as world oil prices will govern the local price. Of course Canadian sourced crude, refined in Canada will also be sold at world prices - even within Canada, because the cost to produce the crude from oil sands is so high.

Imperial Oil (which wholesales fuel to others for sale under various brand names) has long been importing refined product from Antwerp for the Atlantic region. The latest tanker, Pacific Jade, arrived in Halifax March 5 and is due to sail this evening March 6. 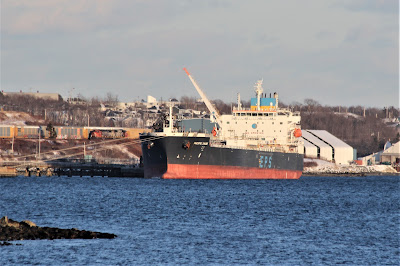 A typical MR tanker of 29,476 gt, 49,995 dwt, it was built in 2020 by STX Offshore and Shipbuilding in Jinhae, South Korea. It operates for Eastern Pacific Shipping Pte (hence the EPS on the hull). According to its website, the Singapore based company manages 191 ships totaling 19 million deadweight tonnes. They claim 44 tankers, including 11 chemical and 22 gas carriers, 38 bulkers, 55 container carriers and 9 autocarriers. (The arithmetic does not add  up so I am not sure where the error may be).

Irving Oil imports fuel from Amsterdam, where it has a blending facility. However it also has a refinery in Ireland, so may continue to import refined product from Europe into Canada. It also imports crude oil from various sources for refining in Saint John, NB, and other fuels from around the world.