The eastbound ship, MSC Sandra arrived last evening March 4 from Montreal on its regular Canada Express 2 service from Montreal to Spain. The ship stops in Halifax to top up cargo to seagoing draft after having to comply with St.Lawrence River draft restrictions.

Before sailing several crew members gathered on the forecastle head to clear lines. The ship had picked up a dusting of frozen spray on its way in. After previous posts on the subject, this is an example of an anchor being iced up, but apparently free to deploy if needed. (The mate may have been having a Jack Dawson moment).* 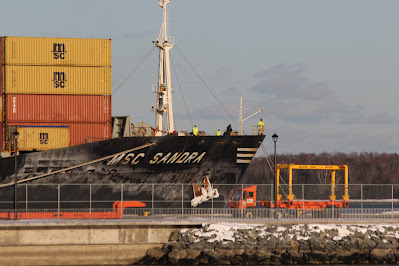 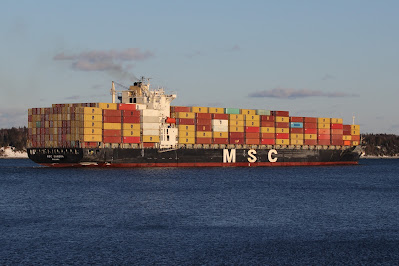 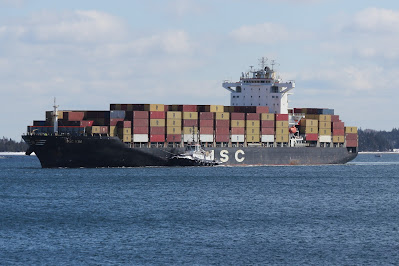 MSC Kim is a slightly newer ship, built by Zhejiang Yangfan in 2008. At 41,225 gt, 50,547 dwt it has a capacity of 4254 TEU including 550 reefers. It is due to sail for Montreal overnight after unloading some containers to reduce draft. 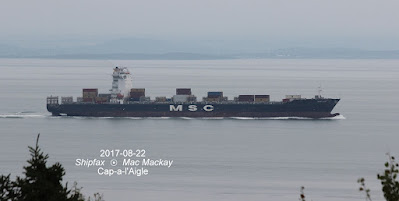 A regular on the St.Lawrence River for several years, I photo'd the ship in August 2107, very lightly loaded and doing 18.5 knots. It is always i,mpressive to see these ships booming along at speed.

* My apolgies for a couple of perhaps oblique movie references in recent days.

The first was in the title to my post of March 3. It was a play on the title of a wonderful 1966 move entitled "The Russians are Coming, the Russians are Coming", which in itself was a play on the reputed Paul Revere cry "The British are Coming, the British are Coming". The movie was about a Russian submarine crew that sought help from a New England island village when their sub ran aground. If you haven't seen the movie, or haven't seen it for a long time, the Wikipedia entry is worth a read at: Russians

The second reference is in today's post to the fictional Jack Dawson in the 1997 movie "Titanic" who, perched on the very prow of the ship, proclaims that he is "king of the world".