An article in the April-May 2022 issue of the excellent magazine Canada's History contained an error that reminded me how "unmaritime" Canada has become - not only that, but how "untechnical" many educated people may be. Most Canadians live close to navigable waters, but are woefully uninformed about ships and shipping.  Similarly, despite relying on technology for much of our lives' activities, we have little detailed knowledge of how things actually work.

The magazine piece entitled "Winging It" (page 15) describes a voyage by the American naturalist John Ripley Forbes in 1937 and his subsequent illustrated article published in the magazine The Beaver in June 1942. (The Beaver was the house magazine of the Hudson's Bay Company, and the direct antecedent of Canada's History - now independently operated by Canada's History Foundation.)

Forbes made the trip with Captain Donald B. MacMillan, an American explorer / adventurer of note (it was his sixteenth arctic expedition) voyaging along the Labrador coast as far north as the Arctic Circle and Cumberland Sound. Forbes saw and photographed many species of seabirds but was particularly enamoured of the puffins.

However here was the error: the article writer states that Forbes made the voyage on MacMillan's "steamship the Gertrude L. Thebaud." This is wrong on so many levels that I must shift into my pedantic rant mode.

Firstly the Gertrude L. Thebaud was most assuredly not a steamship or a steam ship either. It was purposely built in 1930 to rival Canada's Bluenose in the international fishing schooner races (it beat the Bluenose two races to none in 1930 and lost to the Bluenose two races to none in 1931 and lost in three races to two in 1938). It was built as a fishing and racing schooner, and after the orginal Bluenose, was arguably the second most famous Grand Banks fishing schooner of all time. The power of the internet would have revealed this to anyone within five seconds of typing its name. I refer you to Wikipedia's brief history at Gertrude L. Thebaud. Mention is made there of the fact that the Bluenose was fitted with a diesel engine by 1936, which put an end to the hopes of Fishermen's Cup races for 1937, because the owners could not afford to have it removed for racing. With that, the Thebaud was leased to MacMillan for his 1937 expedition. The Wikipedia piece does not mention that the Thebaud raced again in 1938 and was again defeated by the Bluenose. Presumably the engines were not used or were removed for those last races! 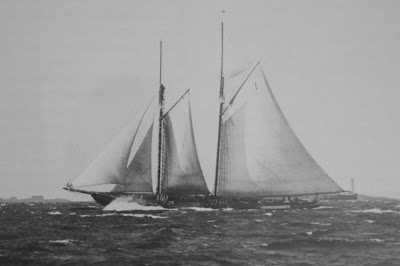 Despite the number One on the sail, this may not be the orginal Bluenose, but one of its US rivals, possibly the Elsie, sailing off Maugher's Beach in Halifax, likely in the 1921 Halifax Herald Fisherman's trophy race. (from a McAskill print in a private collection.)

For the record, the Gertrude L. Thebaud served the US Coast Guard in World War II then became a cargo vessel. It was wrecked in Venezuela in 1948. The Bluenose met a similar fate in 1946 in Haiti.(All this informaiton is available on line with a little hunting.)

Details of the 1937 MacMillan voyage take a bit more digging. A University of Maine alumnus' account of a near fatal grounding in Frobisher Bay (complete with photo) states that the Thebaud's motor launch was used to tow it out of shallow water after it had run aground. See Walter Staples '38 remembers .

Read more about MacMillan here: MacMillan. MacMillan chartered the Thebaud in 1937 instead of his own well known, but much smaller, schooner Bowdoin (which still exists) because he needed a larger vessel to carry the thirty-seven persons of that year's expedition, instead of the fourteen he usually carried on the Bowdoin. Even though the Thebaud was not ice strengthened, there was no plan to sail into ice infested areas. I learned this from the book Green Seas and White Ice (New York, Dodd Mead and Company, book club edition, 1948) by Miriam MacMillan, Capt. MacMillan's wife. (The book is in my collection.)

In her book Mrs. MacMillan describes the 1937 grounding (although she was not present). Several planks were sprung, the Thebaud healed over on its side, the hull was flooded and "the main engine was soaked with salt water" [page 67]. MacMillan supervised the righting and repair of the vessel in one of the more dramatic incidents of a lengthy career in the north.

Now to the technical. Diesel engines and steam engines are vastly different species of marine propulsion. Perhaps the distinction is too fine a one for non-technical persons, but there is a world of difference. Nowadays there are a few extant steam ships as there are only a few steam railroad locomotives and steam road rollers. They are so few and far between, that many people have never even seen one (unlike yours truly). Nevertheless I take exception to using the term steamship (or steam ship or steamroller) generically. One on line dictionary says a "steamship" is "a large commercial vessel, especially one  driven by steam".  I  regret this as sloppy usage (which unfortunately has become common.) Nevertheless the Gertrude L. Thebaud would not qualify for even this nomencalture in my opinion, since it was not "large" and not a "commercial vessel" in the usual sense. It was a fishing and racing schooner, rigged for sail, but also fitted with a diesel engine.

(Granted Canada Steamship Lines has used the term since 1913 but that is as much a matter of history rather than a technical fact, since there are no steamships in its fleet anymore. There are large commercial vessels however.)

The Thebaud was fitted with its own means of propulsion (in addition to sails) when it was built. In the usage of the day the diesel engine was described as a "180 horsepower auxiliary oil engine". It most certainly was not a steam system, as the boilers and engines would have taken up most of the available hull space, leaving no room for the crew or passengers. Diesel motors were much more compact and had proven reliable (short of complete immersion.) My source for the description of the motor comes from Fast and Able - Life stories of Great Gloucester Fishing Vessels, by Gordon W. Thomas and published by Historic Ships Associates, Gloucester, MA, 1968 (also in my collection.)

Back to the maritime: The Gertrude L. Thebuad was not a ship at all (especially not a large commercial vessel) - neither was it a boat. It was a schooner. Sailing vessels are properly described by their rig (sloop, cutter, ketch, yawl, brig, barque - you name it.) A "ship" is a particular configuration of sailing rig (square sails on all masts and a jigger) and the term "ship" when referring to a sailing vessel, must be used only for one with a ship rig.  If a non-specific term is needed to describe it, there are several available words such as "vessel", "craft", etc., In the 1937 MacMillan expedition the Thebaud likely made some of the long passages under sail but used the diesel engine as the primary means of propulsion. Since there was no means of refueling in the north, and tank space was limited, they needed to use the sails when possible. (The last port for refueling and taking on fresh stores was Sydney, Nova Scotia, where the Thebaud stopped off on the way north in June 1937.)

Even when motorized, the Bluenose and Thebaud would still be called schooners by nautical folk, but could also be called "motor schooners". To call them "motorships" would not be correct, in my opinion - they were "motor vessels". Some motorized versions of sailing craft used the engines as "auxiliaries", that is, as a secondary means of propulsion to supplement sail. Others abandonned sail altogether and installed larger engines as the sole means of propulsion. In 1937 the Bluenose and Thebaud had not disposed of their sails entirely. Only the top masts were brought down and stored until  the next races. [Halifax Herald October 19, 1937.]

A few terms have, perhaps unfortunately, continued in use even though the original meaning has been lost (steamship is certainly one). All manner of seagoing craft are now called ships (and they aren't sailing ships) but are still described as "sailing" or "steaming" when they are doing neither, but we generally understand what that means. I confess to using these last two terms indiscriminately to describe vessels underway. However I do have to put my foot down with "steamship" in this case where it was not a "steamer" and was not a "ship".

So in conclusion all this leads to the reality that it is so easy to spread misinformation or gloss over inaccuracies if there is not a culture of widely knowledgeable editors and fact checkers. Errors that creep into print are there for ever, thanks to the internet, and can never be altered despite later published corrections. They continue to be relied upon as fact in subsequent publications, until the source of the error is lost for all time.

A side example are the many references to Robert Peary's claim that he reached the North Pole which has now been discredited, but stood as "fact" in many references, including Mrs.MacMillan's book. MacMillan was with Peary for a time on that incredible trip in 1909, but had to turn back due to frostbite. "Don't believe everything you read" must still be good advice. (Except the foregoing which you may read as 100% fact and may quote without citation or credit. On a conciliatory note, I do acknowlege that the my foregoing rant may be a case of using a shot gun as a flyswatter.)

We look forward to seeing the "recreated" Bluenose II in Halifax this summer, 101 years after the launch of its namesake, and a reminder that similar schooners once ranged far and wide off our shores. Including the Gertrude L. Thebaud they were anything but "steamships." 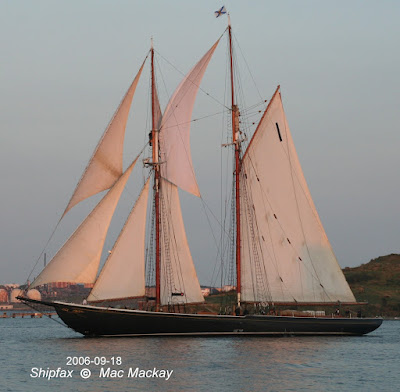