Langlade: from the Where Are They Now Department

It has been some time since we heard from "Where Are They Now", but a recent press release from Tahiti of all places rang a wake up call in the WATN Department.

The Société de Navigation Polynésienne has ordered a new container and RoRo ship for delivery in 2025. Although the ship will be built by Royal Bodewes in the Netherlands, it will service a route between Huahine, Raiatea, Taha'a and Bora Bora, replacing a smaller ship. It is that smaller ship that tripped the bell.

Now named Hawaiki Nui (or Hawaikinui depending on references) it was built in 1980 by La Société Nouvelle des Ateliers et Chantiers de La Rochelle-Pallice in France and came in at 800 gt, 1050 dwt. It was equipped with a stern door and ramp, a cargo derrick and was ice stengthened. Named Langlade it served the French islands of St-Pierre et Miquelon. Its name came from Miquelon - Langlade, two islands connected by an 8 mile long sandspit and 3 miles west of the island of St-Pierre. The archipelago is located 12 miles off the south coast of Newfoundland and is a French territory. 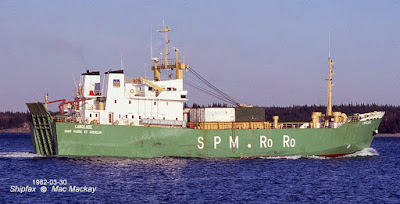 Operating as SPM Ro-Ro, the ship made weekly trips between Halifax and St-Pierre with containers, RoRo and a small number of passengers. (It was noted for its hospitality, particularly when the bonded stores were opened). As France's remaining outpost in North America, St-Pierre et Miquelon relies to a large degree on cargo movements to and from France. The ship made the connection in Halifax with Atlantic Container Line's container / RoRo service from Le Havre since the island ports cannot accommodate large ships.

The ship ran under French flag from 1980 until 1989 when it was sold to Puddister Shipping Co Ltd of St.John's. They ran the ship as Northern Cruiser until 1998 on Labrador supply and other coastal runs. In 1998 it returned to the French flag and was transferred to Tahiti, where it has been operating ever since under the name Hawaiki Nui. For more on the meaning of the name see: Hawaiki Nui Va'a

From the various on-line images I can see the current ship has been reconfigured somewhat, with the addition of a cargo crane and possibly more passenger accommodation. Tonnages are now listed as 895 gt and 1158 dwt.

The replacment ship, to be named Hawaikinui 2, will be of more modern appearance, with a wave piercing bow - not likely ice strengthened however: 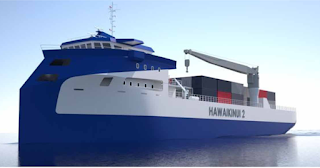