Among the annual signs of spring is the opening of the St.Lawrence Seaway, which took place (officially*) today, March 22. With that the CSL bulk carrier Baie St.Paul got underway from its "winter layup" berth at Pier 25-26 in Halifax. 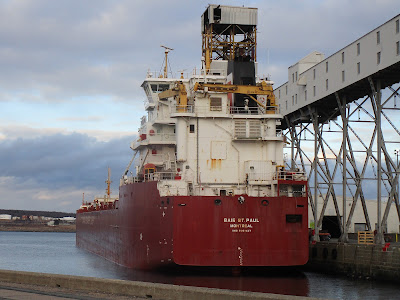 Traditionally Great Lakes ships went into winter layup in December and remained idle or had maintenance work until spring. The newer generation of ships have extended the season, and often work outside the Great Lakes well into the winter, if not year round. Baie St.Paul, a Trillium class self-unloader has been upgraded to make coastal voyages. This winter it was kept busy carrying salt from the Magdalen Islands until it arrived in Halifax February 15. (In 2021 it worked until March 11).

This morning the Baie St.Paul headed for Bedford Basin to load gypsum at the Gold Bond dock, but once in the Basin plans changed due high winds. Instead the ship turned around and returned to the lower harbour and anchored.

The Baie St.Paul heads back to the lower harbour.

Bedford Basin is not ideal for anchoring in certain conditions, as the bottom is not considered to be good holding ground, and anchors tend to drag. Even in the lower harbour anchorage area the ship took a long time to fetch up on its anchor, with the wind continually pushing the ship southward. 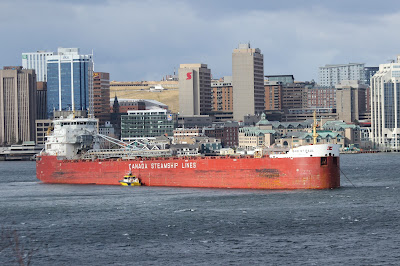 The pilot boat is alongside to disembark the pilot when the ship finally comes to a stop with its nachor holding.

All indications are that the winds will die down after sunset, and the ship is now scheduled to move to the gypsum dock at 2100 hrs ADT. It will carry the product to the St.Lawrence River or Great Lakes.

* Some ships were moving in the Seaway prior to the official opening. The CCGS Martha L.Black has been icebreaking for several days in the Beauharnois area of the Canadian sector and the US Seaway tug Seaway Guardian likewise bertween the US locks. Also CSL's sister ship CSL Welland was upbound March 21 to be on hand for the official (ceremonial) opening of the Welland Canal, also scheduled for today.