An unusual mid-morning arrival for Autoport was the Morning Calypso a Eukor car carrier working on the Wallenius Wilhelmsen transatlantic service. 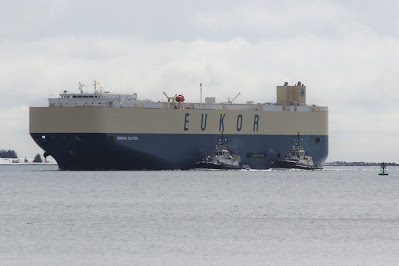 Once inside Maugher's Beach, tugs take charge of the ship to assist it round  Macnab's Island to Autoport.
Built in 2013 by Imabari Zosen in Marugame, Japan, the 59,590 gt, 18,713 dwt ship has a capacity of 6142 car equivalent units (CEU). Once it had completed loading the ship made a 1700 hrs (AST) departure time and there was still enough light to catch it in roughly the same position after it rounded Ives Knoll and was outbound for New York. 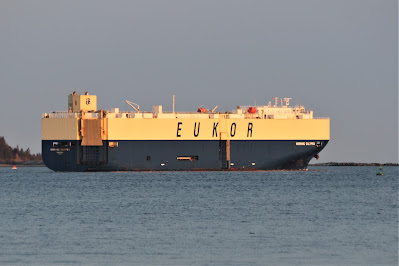 Another caller was the Seamax New Haven on MSC's Indus 2 route from Northwest India to the US east coast.  It arrived early yesterday, March 9 and tied up at PSA Halfax, and had a pilot order to sail at 1730 hrs today. With the usual routine of raising cranes, making fast tugs and letting go lines, it was after 1800 hrs when the ship was clear for a photo. 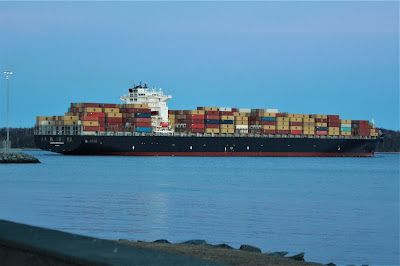 An unsual charter for MSC (possibly a short term or spot charter, because the ship does not carry an MSC name), the ship is owned by Tranship LLC and under the commercial management of Seamax Capital Management LLC of Stamford, CT. The company manages a closed private equity investment fund and currently runs twelve (older) post-Panamax container ships totaling more than 100,000 TEU. All are named for cities in Connecticut, which has become the "haven" for New York shipping companies.
The Seamax New Haven was built in 2005 by Samsung, Koje as Ever Charming for Reederei NSB [Niederelbe] on charter to Evergreen Marine Corp of Taiwan. It is a 90,449 gt, 100,887 dwt vessel with a capacity of 8084 TEU including 700 reefers. It was acquired by Seamax and renamed in 2017. As with many US owned ships it is registered in the Marshall Islands. Technical management is entrusted to Fleet Ship Management Pte Ltd of Hong Kong.