With another wind storm sweeping through Atlantic Canada, ships were riding it out in various places around the region.

Chedabucto Bay - to the east of the Strait of Canso - saw the unsual sight of two ships with similar names. The bulk carrier Algoma Integrity anchored not far from the cable ship IT Integrity, both familiar Halifax callers. A third ship from Halifax, Nolhan Ava, en route to Argentia and St-Pierre et Miquelon on its weekly service also sheltered nearby. 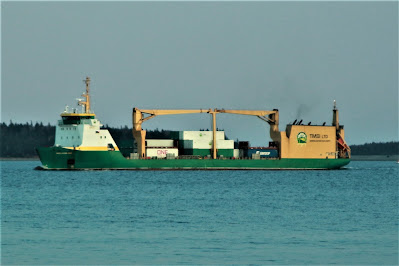 For its arrival in Halifax March 10 the Nolhan Ava had calm conditions.

High winds forced other ships to leave their berths for more secure moorings. Among them was the Canadian Navy's chartered supply ship Asterix . On Friday March 11 it was tied up at Irving Oil's Woodside terminal for one of its periodic refills but returned to HMC Dockyard on Saturday March 12. It will move back to Woodside when conditions improve. 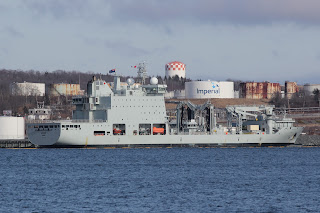 Asterix tied up at Irving Oil's Woodside dock, but next door neighbour Imperial Oil's tank dominates the lamdscape with its label facing Halifax. The red and white checkered tank is part of the Shearwater military base.

Ferry services on the Bay of Funday and Cabot Strait were suspended due to high winds, but fortunately two troubled ships had reached port safely. The container ship MSC Kim arrived in Sydney Friday March 11 in tow of the Atlantic Kingfisher with the tug Atlantic Spruce as tethered escort and CCGS Jean Goodwill standing by. It lost power in the Gulf of St.Lawrence on March 7.

Meanwhile in Newfoundland the 180,000 dwt bulk carrier Comanche was brought to anchor in Placentia Bay March 12 by local tugs. The ship lost power after bunkering at Come by Chance on a trip from Sept-Iles to Asia (via Suez) with a cargo of iron ore. The supply tug Maersk Clipper was mobilized from layup to assist. CCGS Terry Fox was also nearby.

In Halifax harbour, the Canadian product tanker Algoterra went to anchor in Bedford Basin on arrival March 12. Its eventual destination is Imperial Oil, but the berth there is not safe in these high winds. 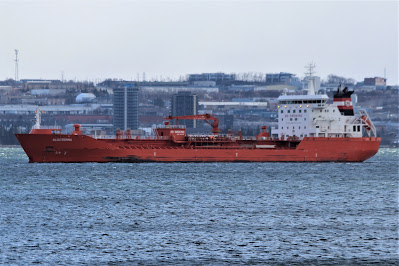 Algoterra first arrived in Halifax April 14, 2019 after it was purchased from Knutsen Product Tankers. Built in 2010 by Jiangnan, Shanghai as Louise Knutsen it carried the name Louise K for the delivery trip from Amsterdam. It was registered in Halifax April 15, 2019.
Algoterra is a 11,889 gt, 16,512 dwt ice class product tnaker. It was in winter layup in Montreal from December 12, 2020 and sailed March 7 to Lévis, QC. There it loaded March 8 and 9 and sailed for Halifax. Recent world events may have disrupted normal supply chains and brought the ship back into service. Imperial Oil does not usually acquire product from its competitor refinery.

Recent tanker acquistions by Algoma have kept the paint schemes of the previous owners and may not appear in Algoma blue until their next scheduled drydocking. Algoterra still wears the orange hull of Knutsen ships, but does carry the Algoma "Bear Spot" funnel mark.