More regulars and some firsts 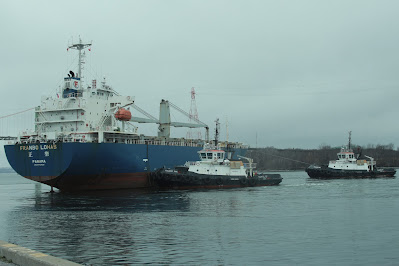 With the assistance of the tugs Atlantic Fir (forward) and Atlantic Oak (aft) the ship turned in the Narrows directly off its berth at Pier 9C South this morning (March 26), and was soon outbound for sea. 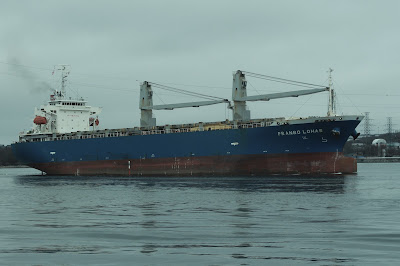 The steel cable racks take up space in the ship's hold but don't add much weight, so the ship is still at very light draft. Even when it loads the cable from the factory in Portsmouth, it will not be at full carrying capacity.

A ship that did appear to be at capacity - at least by volume of cargo - was this afernoon's arrival of ONE Houston on THE Alliance's EC5 service. 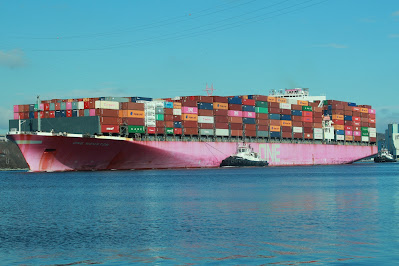 With the tug Atlantic Oak on the port side, Atlantic Fir to starboard and Atlantic Beaver tethered escort astern, the ship made a smooth passage through the Narrows to Bedford Basin and berthed at Fairview Cove.

The trademark magenta paint colour selected by ONE is showing signs of fading. The line will have to solve the durability issue or the ships will soon begin to look fairly scruffy.

Speaking of paint issues, I noted on its first arrival for Eimskip under its new name, that the ship Vivienne Sheri D did not yet have its name painted on the bow. (See Shipfax September 13, 2021) That was soon corrected, but the ship likely put to sea before the paint was fully cured, and it has since partly washed off. Not surprising as the ship maintains a tough schedule from Iceland. 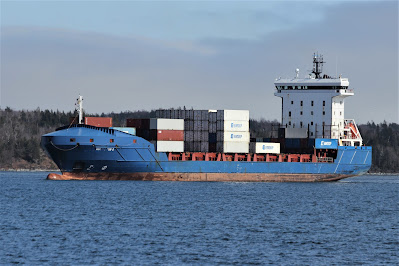 As per the previous post the ship is now owned by the Doornekamp Shipping Ltd  from Odessa, ON, and Picton, ON. Doornekamp acquired the ship while it was still under charter to Eimskip, and the plan is to work out that charter before being assigned to Doornekamp's transatlantic line in cooperation with Spliethoff's. Doornekamp's other ship, the Peyton Lynn C is due in Cleveland, OH from Europe April 1 on that service.

Another first time caller arrived yesterday March 25 in the thick fog and tied up at Pier 28. Despite near impossible photo conditions at that pier, I did manage to poke my spycam through the fence for this: 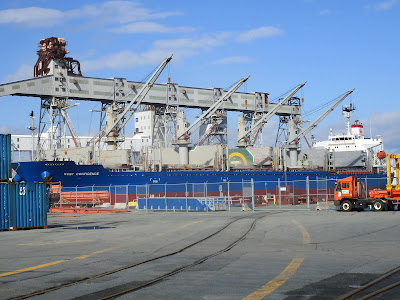 Ruby Confidence is a 23,885 gt, 38,013 dwt bulk carrier built in 2016 by Minami nippon in Ozai, Japan. It was originally named Supreme Star and was renamed Sider Syros in 2020 and took its present name in 2021. It carries four 30 tonne cranes and three 24 tonne / 12 cubic meter grabs. It also has stanchions for timber deck loads.