The Russians are Not Coming

Russian flagged ships have been fairly rare in Canadian waters recently, but Russian owned ships, flying the flags of Liberia or other flags of convenience have been fairly common. The huge SOVCOMFLOT (SCF) tanker fleet was the most often seen as they delivered refined product to ports in eastern Canada, including the St.Lawrence River. The recent ban on trade with Russia has brought an end to those calls.

Two SCF tankers have been in Canadian waters very recently. The SCF Ussuri was making its way inbound to the Gulf of St.Lawrence March 1 when it turned back off St.Paul's Island, just west of the Cabot Strait. It returned to disembark its ice adviser off Sydney, NS and after a time hove to in Canadian waters it returned to sea. Its cargo likely belongs to a Canadian company, so what will become of it is not known.

The most recent SCF ship to call in Halifax was Transsib Bridge which unloaded cargo at Irving Oil on February 20-21. It had previously loaded in Amsterdam February 1-2 and delivered some cargo to Saint John, NB, February 19. 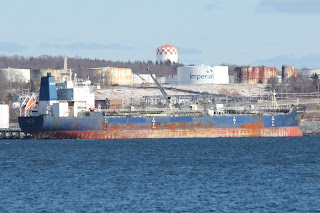 When it sailed from Halifax it gave Amsterdam as its next port, but on approaching Europe that was changed to Ust-Luga, a Russian port on the Gulf of Finland.

From the 1960s to the 1980s there were Russian ships in Halifax almost constantly. Members of the fishing fleet such as factory trawlers, research ships, tugs and tankers were in and out of port regularly. There was also a large trade in bulk grain and shipments of bagged flour to Cuba. There was even RoRo traffic as ships of the USSR delivered the infamous Lada automobiles for unsuspecting North American buyers.

As world events evolve, there is little likelihood of seeing a Russian flagged or Russian owned ship in Halifax in the near future.