Links in the Supply Chain

Much is written these days about the supply chain and current and potential future disruptions. Two important links in the chain are ships and trains, and the two meet in Halifax - but perhaps not always in obvious ways.

It is pretty hard to miss the "ships" part as they arrive and depart almost constantly. The Mediterranean Shipping Company, MSC, is one of the most frequent callers with several of its lines calling here. Today, March 20, it was the Canada Express 1 service from Italy, Malta and Portugal, represented by MSC Donata. 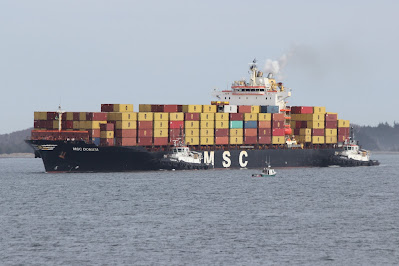 The ship is en route to Montreal and has stopped in Halifax to offload some cargo to reduce the ship's draft for the St.Lawrence River. MSC Donata dates from 2002 when it was built by Hyundai Samho Heavy Industries Co Ltd, South Korea. It is a 40,108 gt vessel of 52,806 dwt with a capacity of 4132 TEU and is fitted with 500 reefer plugs.

As befits the eve of first day of spring and the last day of March Break, Point Pleasant Park was full of people, most apparently oblivious to the fact that a lot of what they consume is carried by the ships passing nearby. 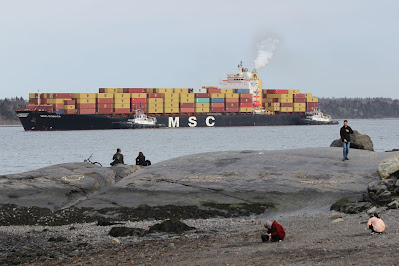 Containers from ships are transported to their landside destinations by truck or train. In the case of Halifax those trains are operated by the Canadian National Railway (CNR). The trains run on steel rails which take a considerable beating from heavy trains and eventually need replacement. New rails are  manufactured in Poland and arrive by ship as in today's arrival of Onego Neva. 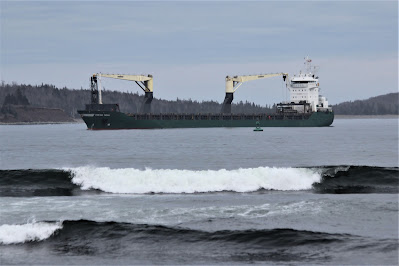 The ship's hull was built in 2008 by Damen Yichang, in China, and completed by Damen Gorinchem, in the Netherlands. First named Leandra it was renamed Thorco Cobra in 2014, Marmindoro in 2016 and Onego Neva in 2018. The ship is operated by the Tom Worden company from Germany, on charter to Onego Shipping + Chartering of the Netherlands. The only connection with Russia seems to be in the ship's name. The river Neva is located in Russia and flows through St.Peterburg on its way to the Gulf of Finland. 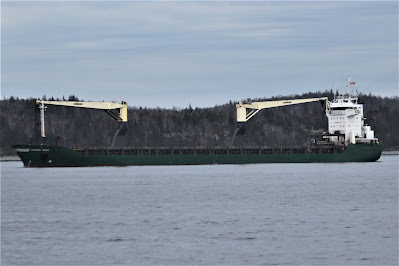 The ship is a 7878 gt, 11,121 dwt multi-purpose, open hatch type, with portable tween decks and two 80 tonne capacity cranes that can combine for a 150 tonne lift. Its cargo of rails will be stockpiled in Halifax and sent out to Winnipeg for processing as CN needs them.

Speaking of rails, Canada's other major railroad, the Canadian Pacific (CPR) is shut down due to labour action. The CPR serves the Port of Saint John, NB and it is not yet known if some cargo will be diverted to Halifax. It is partly dependent on the sympathy of other unions. Saint John is also served by CN, which may take up diversions.