The CCGS Kopit Hopson 1752 arrived in Halifax this morning, March 10, in tow of the tug Atlantic Spruce.  The ship had nearly completed a Vessel Life Extension process at Shelburne Shipyard, however the work will now be finished in Halifax. Irving Shipbuilding Inc (ISI) was awarded the contract for the refit and assigned the project to its Shelburne yard, but today ISI announced that they will be selling the Shelburne operation to Mersey Seafoods of Liverpool, NS. 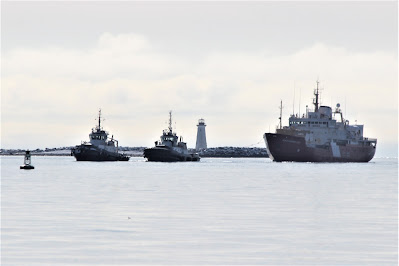 CCGS Kopit Hopson 1752 arrives in tow of the Atlantic Spruce (left) and is met by another tug (likely Atlantic Bear). They shepherded the dead ship to the IEL dock in Dartmouth.

The extensive refit of the ship, which included replacement of its cargo derrick with a crane, was accompanied by a renaming. The ship was built by Marine Industries Ltd of Sorel-Tracy, QC in 1981 as Edward Cornwallis. It was the second CCG ship to carry the name of the founder of Halifax. However in recent years the namesake has been brought into disrepute (to put it politely) for his treatment of the first nations population of Nova Scotia. Political pressure forced the CCG to rename the ship, in consultation with the Mi'kmaq people. I have written extensively on this in prior posts: Kopit Hopson 1762 and here

It was not possible to get a close look at the ship on its arrival, but the new crane changes the ship's profile considerably. 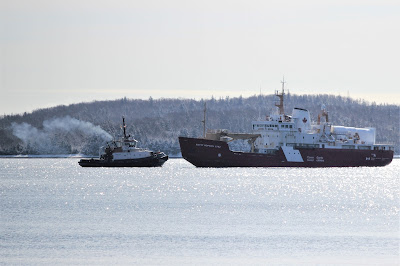 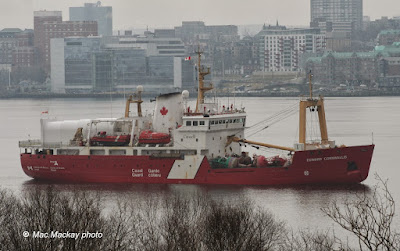 The original derrick has been removed and replaced by a crane, radically changing the ship's profile. Cranes have proven to be quite capable of handling the buoys that the CCG ships tend in this region.

The Kopit Hopson 1752 will look more like its fleet mate the CCGS Sir William Alexander, but the cranes are different. Along with several other similar CCG ships it is considered to be a member of the Martha L. Black class of light icebreaker / navaids ships.