Play Misty for me.

Despite intermittent drizzle and mist, it was "clear sailing" for ships arriving and leaving Halifax today, March 31.

The container ship MSC Tamara got underway for Barcelona this morning after topping up its cargo to seagoing draft. The ship arrived yesterday from Montreal, where draft restrictions on the St.Lawrence River prevent the ship from taking a full load. 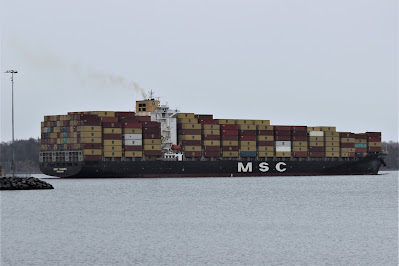 The MSC Tamara  sails on MSC's Canada Express 2 service to and from Spain and Italy. The ship dates from 2007 when it was built by Zhejiang Yang Fan Shipbuilding Co Ltd. It is a 41,225 gt, 50,446 dwt vessel with a capacity of 4254 TEU (including 550 reefers). In a previous post I showed the ship as it was loaded to St.Lawrence draft while passing Quebec City in 2016. 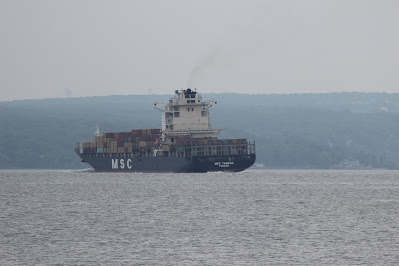 Also arriving from the St.Lawrence River this morning, the tanker Algoterra has another load of refined product for Imperial Oil. This is the second cargo the ship has brought in recently from the Valero refinery in St-Romuald, Lévis, QC. That last visit was on March 12 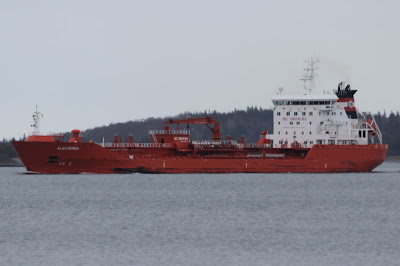 Imperial Oil distributes fuel to several retail brands in mainland Nova Scotia from its terminal in Dartmouth. Until recently much of that product has been from Antwerp, but trading patterns have apparently changed due to current events in Europe. Imperial and Valero would normally be considered rivals, but apparently they have come to an agreement of some sort. Valero has also sent one of its chartered crude oil tankers, Laurentia Desgagnés, from its usual Montreal - Lévis route, to load Canadian crude in Texas.

Gasoline and diesel fuel prices have skyrocketed recently, but so far the oil companies are still able to meet demand.