PSA Halifax announced today that it will be acquiring two new container cranes for its southend terminal during 2023. One crane was already on order, and there was an option for a second which has now been picked up. Both cranes will have a reach of 24 containers, which means they can handle the largest ships currently calling in eastern North America.

One of those ships, the 16,000 TEU  CMA CGM Alexander von Humboldt was alongside today with two cranes finishing up work late this afternoon.

With the addition of the two new cranes, the terminal will have seven "Super Post Panamax" cranes of various heights and reaches. 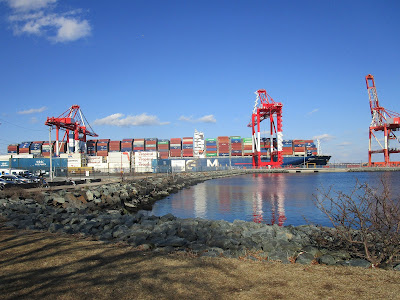