With the war clouds roiling in Europe, the population of Halifax cannot help but be reminded of the Port of Halifax's role in wartime. Halifax was founded in 1749 as a counter to the fortress of Louisbourg, and has been used by naval vessels ever since. It has also played an important role in merchant shipping during every major conflict ever since. The population has paid the price in various ways but has also benefited, with the military, defense based industries and HMC Dockyard as the major employers in the City.

As a member of NATO, Canada contributes ships to standing forces and participates in exercises with other NATO countries, most notably the United States. For the past few weeks, the next ship to be assigned to NATO in the Mediterranean has been working up off Halifax. HMCS Halifax put into port today (March 8) and anchored in the lower harbour. 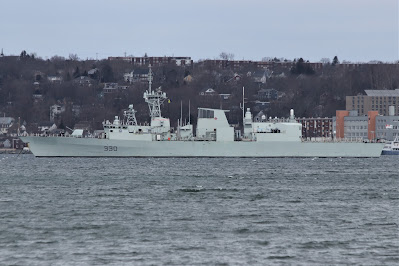 It was announced in late February that the ship will be sent to Europe in direct response to the Russian invasion of Ukraine. Sister ship HMCS Fredericton Montreal sailed from Halifax January 19 for a six month deployment with NATO.

An as yet to be identified US submarine arrived at noon time and tied up at Navy Jetty Alpha. 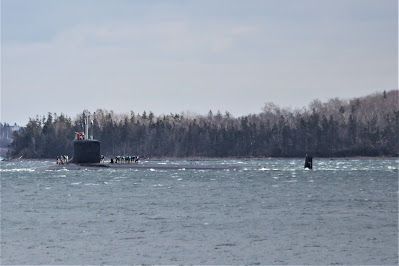 Accompanied by four navy tugs and a fleet diving unit boat, the sub made its way to the Shearwater pier. All US submarines are nuclear powered, and they always tie up at Shearwater rather than at HMC Dockyard itself, which is in the centre of town.

As if we need more reminders of the nuclear age, the cargo ship CLI Pride made one of its seasonal calls in Halifax, arriving yesterday and sailing today. I have covered this ship many times in the past see: CLI Pride references 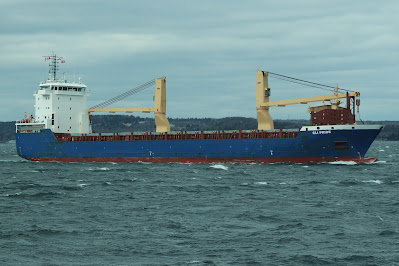 We usually only see the ship in winter when it avoids the St.Lawrence River with its cargoes of uranium hexaflouride. This year however the ship did make its January trip to the St.Lawrence as there was not much ice. The ship is owned by Compass Schiffahrts and operated by SMS Bereederung of Haren (Ems), Germany.As with many German ships its flies the flag of Antigua and Barbuda.

On this trip the ship loaded in Ellesmere Port (near Liverpool UK), site of a large nuclear power plant called the Ince Power Station. Spent uranium from European reactors is sent to Canada for reprocessing to make it viable for long term storage or to be prepared for re-enrichment. Canada also exports uranium hexaflouride. As usual Wikipedia provides a potted story about the material see: Hex