MSC Kim - end of chapter one

The container ship MSC Kim sailed from Halifax in the late evening of March 5, bound for Montreal. It had been at PSA Halifax for a few hours to decant some cargo to reduce the ship's draft to meet St.Lawrence River restrictions. It is regular practice of Mediterranean Shipping Company (MSC) ships to call in Halifax en route to or from Montreal to off load from or top up to ocean draft. This visit was no different, see Shipfax March 5 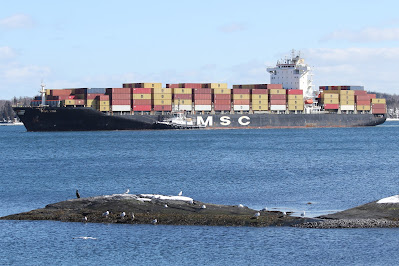 The ship was making its way across the Gulf of St.Lawrence in the early hours of March 7 when it had a main engine breakdown 40 nautical miles south of Anticosti Island and 66 nautical miles east of Percé. The ship began to drift in high winds and by today (March 10) it was reported to be 50 nautical miles off Port au Port, NL, still without the use of its main engine.

In the meantime, the ship's owners scrambled to develop a salvage plan. Details have not been released as the whether this was a Lloyd's Open Form (No Cure No Pay) salvage contract, or a more basic towing contract. However in view of the potential of the situation, the Canadian Coast Guard would have the responsibility to oversee and grant approval for any operation.

The CCGS Terry Fox icebreaker was the nearest large CCG asset and it was dispatched to Stephenville, NL where Atlantic Towing Ltd had some powerful tugs laid up. ATL rounded up a crew and quickly mobilized the 16,000 hp anchor handling tug/supplier Atlantic Kingfisher from cold layup. According to reports the Terry Fox provided fuel to the tug then broke out the ice in the bay to allow the tug to sail. It was able to reach the ship and rig a tow in matter of a few hours.

Latest reports on the evening of March 10 have tug and tow due in Sydney harbour in the early afternoon of March 11. CCGS Terry Fox will likely be escorting the pair. The tug Atlantic Spruce out of Saint John, which had just towed the CCGS Kopit Hopson 1752 from Shelburne to Halifax, was also sent on to Sydney to assist.

The tug Atlantic Kingfisher was built by Halifax Shipyard in 2002 and was named for the avian emblem of the old City of Halifax which also appears in the middle of the coat of arms and flag of the Halifax Regional Municipality (formed in 1996). (It is apparently a symbol of industry.) 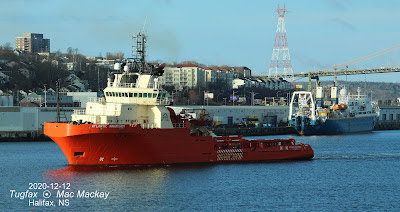 Ironically, at 23,200 bhp, the Terry Fox is one of the most powerful tugs ever built in Canada, but as a CCG ship it is not equipped or mandated to tow except in dire emergency. Civilian craft are expected to make commercial arrangments for towing. Canada operates no Emergency Towing Vessels (ETVs) on Canada's east coast. A sister ship of Atlantic Kingfisher, the Atlantic Eagle and a similar vessel Atlantic Raven, are contracted as ETVs on the west coast. That controversial contract has been extended but expires in Novemeber of this year (2022.) 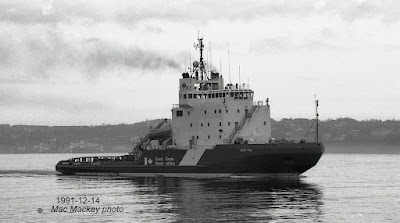 CCGS Terry Fox, one of Canada's two big icebreakers, was built as a tug supplier.