"Going away" photos, especially backlit ones, are not the most desirable for those aficionados of ship photography, but when that is all you can get you take them anyway. Such was the case today ( March 27) with MSC Lucy. It had frustrated me on its visit in January when it arrived and departed in the dark when no photo was possible.

On that January call the ship had spent some days hove to in the Gulf of Maine waiting for the storms to pass before entering Halifax harbour.

When MSC began calling Halifax with its Indus 2 service from northwest India via the Mediterranean to east coast North America in October 2021, there were eight ships in the rotation, but most of the first eight did not call again. MSC Lucy was the thirteenth ship when it made its first call in Halifax in January. 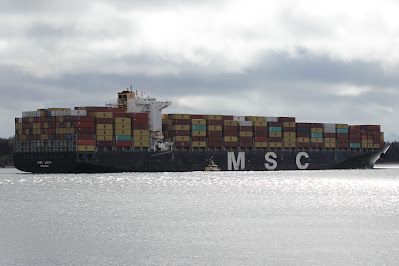 With the pilot boat Capt. E.T.Rogers close alongside MSC Lucy has just cleared Pier 42 at PSA Halifax and is about to swing into the western (deep water) channel.

MSC Lucy is a 2005 product of Hanjin Heavy Industry and Construction Co Ltd in Busan, South Korea. It is a 89,954 gt, 104,954 deadweight ship with a capacity of 8089 TEU including 550 reefers. Its next port of call is to be Norfolk. The Indus 2 will be forsaking Norfolk next month and calling on Boston instead - this may be another opportunity for short sea traffic from Halifax.

Women's names have long been popular for ships (see MSC above.) The other departure today, Wallenius Wilhelmsen's Manon, is named for an opera character, the theme for all Wallenius ship names. Wallenius had either Puccini's Italian language opera Manon Lescaut or Massenet's French language opera Manon to choose from - both based on the same French novel. 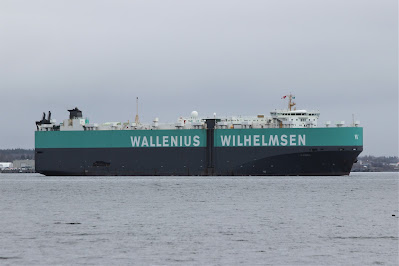 I have seen this ship many times, particularly in its original Wallenius green and white paint scheme, but had not been able to get a clear shot of the ship underway since it was repainted in the combined fleet colours last year. (See an alongside photo at Autoport, exactly one year ago: March 27, 2021)

The pilot boat doesn't look quite so small in comparison to the ship from this angle.