Canada Steamship Line's newest ship, the Nukumi, arrived today, March 27, on its delivery trip from the Chengxi Shipyard in Jiangyin, China via the Pacific Ocean and Panama Canal. 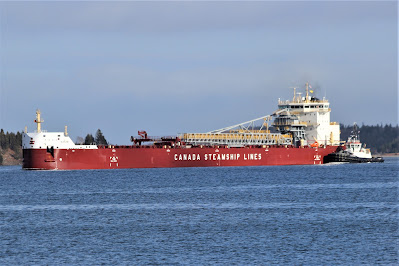 Built especially to carry salt, the ship will operate from the Mines Seleine mine in the Magdalen Islands to ports around eastern Canada and into the Great Lakes. Salt is a notoriously hard cargo on ships, and this one has been purpose built, in cooperation with Windsor Salt, to withstand the rigors of that trade. 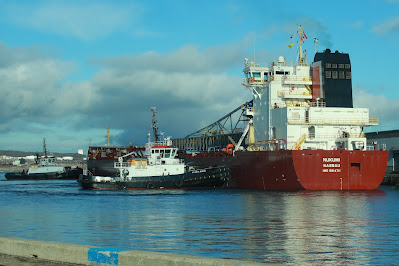 The ship has established many firsts, such as the first diesel electric powered "laker", and the first single point loader/ selfunloader. Measuring 22,715 gt, 25,800 dwt. The ship was temporarily registered in the Bahamas for the delivery trip, but will be re-flagged Canadian and registered in Halifax before entering service.

CSL has done a fine job in publicizing the ship, and providing additional detail; see: Nukumi

The ship is named Nukumi, pronounced "noo-goo-mee", for the legendary wise old grandmother figure of the Native American Mi’kmaq people, traditional occupants of the unceded lands of eastern Canada.