Weather conditions have played havoc once again with the traditional opening day for the District 33 and 34 (southwest Nova Scotia) lobster season - the last Monday in November. Known as "Dumping Day"  it is the day when fishers set out their limit of 375 to 400 traps, hoping to make a good early season catch before severe winter weather comes along and hampers fishing. The District 33 and 34 season closes in May. 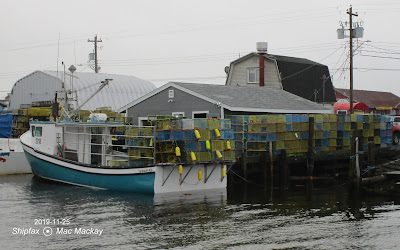 Not yet fully loaded yet, Lady Georgina sits in Eastern Passage, awaiting the start of the season.

Dumping Day can be the most dangerous day of the season because the boats, limited in size to 45 feet, can become unstable, if loaded too high with traps. 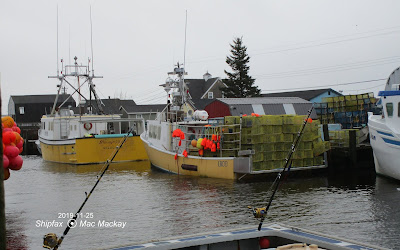 Therefore good weather is needed for a safe opening day. Today's combination of wind and left over seas from last night's storm have resulted in the delay this year. 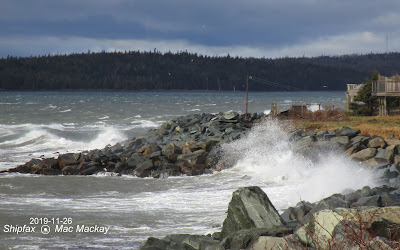 The waves were still pounding in at Eastern Passage this morning, long after last night's storm had passed.

Eastern Passage, on the edge of Halifax harbour, is the eastern most limit of District 33. The zone extends to Barrington and District 34 picks up there and reaches Digby.

With Dumping Day now scheduled for Tuesday, November 26, it is expected that fishers will be on the water early in the morning to ensure that they get their traps in their preferred locations. The Coast Guard will also be on alert to assist any boats that may get in trouble.