Less than ideal photos of several ships recently left a challenge to do a bit better.

The November 9 photo of Atlantic Sky alongside Fairview Cove taken from Granbury Place in Fairview was one of those, and today's ideal conditions gave a chance to catch the ship as it approached the MacKay bridge inbound. 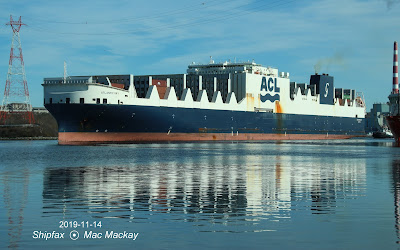 The ship is on the eastbound leg of its trip and is due to sail over night for Liverpool.

I wasn't able to improve much on the July 18 [http://shipfax.blogspot.com/2019/07/harbour-round-up.html  ] photo of Algoma Verity but today's shot does underline the point that when Algoma took over the former Alice Oldendorff they did not plan to do much repainting.

In today's photo, the shoreside traveling loader is working on the forward holds, and so the unloading boom is not swung out over the dock, but is raised to allow the loader access to the hatches. 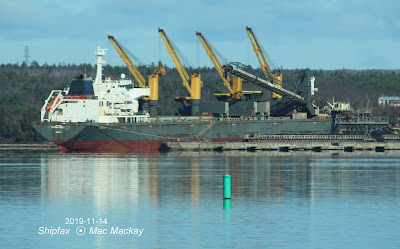 The green spar buoy is H-39 Seaview Point, and opposite Bedford Institute and marks the  entrance to the Narrows from Bedford Basin.

[No there is no view of the sea, but that was the name for a park in the area. In 2011 the park was renamed Africville Park officially, in recognition of the community that was located in the area until the 1960s . When Africville was razed to build the bridge approaches and as part of so called urban renewal, the area not used for the roadways was made into a park and named Seaview Park. A community church in the area, named Seaview African United Baptist Church was demolished in 1969. As part of the civic apology for the mis-treatment of Africville residents in 2002, a replica church has been built, the area has been declared a national historic site and the park renamed. ] 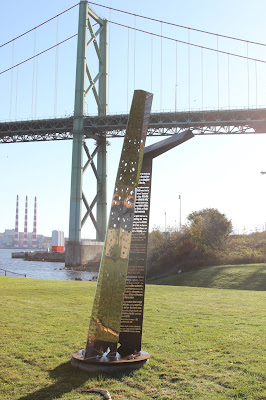 A sculpture in the park pays tribute to the Africville residents who died in the Halifax Explosion - largely unrecognized. The community was severely damaged in the 1917 blast that occurred  nearby.

Also arriving today is the Zim feeder Hansa Meersburg referenced October 31 when it made its first call: http://shipfax.blogspot.com/2019/10/tropical-surprise-and-mystery-guest.html 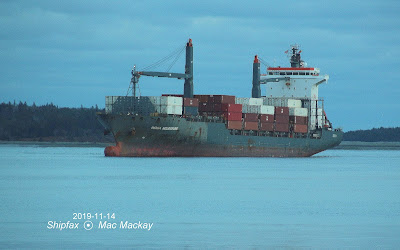