MOL Empire made its first appearance in Halifax today on what seems to be a once only call. 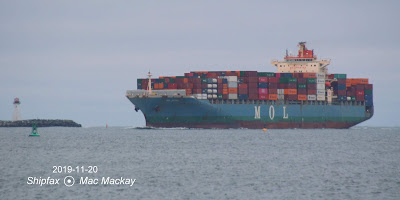 The ship is lightly smaller than the usual MOL ships we see on Alliance service.  Built in 2010 by Hyundai Heavy Industry in Ulsan, this ship measures out at 54,940 gt and 67,170 dwt with a container capacity of 5087, including 330 reefers. The "P" class ships that are regular callers carry 6350 TEUs with 500 reefers.

With tug assistance the ship passes through the Narrows en route to Fairview Cove.

The ship arrived from New York and is headed for Rotterdam and European ports on the AL1 service before switching to the AL5 service for its next transatlantic trip to southern US ports and the Pacific coast. 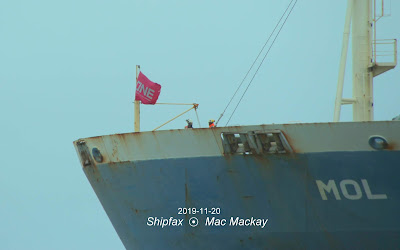 A much tattered ONE house flag apparently flies forward on the jack staff at all times, judging by its condition. It is not quite the official ONE magenta colour anymore (it looks more red) with Ocean Network Express spelled out below the ONE also in whitre lettters. The ONE flag is an acknowledgement that the ship sails for the joint venture of NYK (38%) , K-Line (31%) and MOL (31%) formed in 2018 to merge the three competing Japanese container lines. The merged entity is a partner in THE Alliance with HAPAG-Lloyd, Yang Ming and Hyundai Merchant Marine. 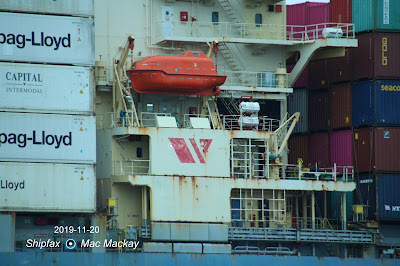 Nevertheless the ship is still owned by Seaspan Corp, the Dennis Washington owned international container ship financing operation that currently owns more than 100 ships. All are leased out to shipping lines. The Seattle-based Washington also owns the Seaspan interests in British Columbia, including the shipyards and tug boat company, but Seaspan Corp is operated independently and trades on the NYSE.

This week Seaspan Corp announced the acquisition of six ships (as yet not identified) for $350 mn (USD). That will swell the owned fleet to 119 ships, with a total capacity now exceeding more than 1 mn TEU or 7.7% of the global container capacity of 23 mn TEU.