There has been a real run on gypsum lately with another load going out today. This time it is a domestic load, on CSL's Salarium a Canadian flag self-unloader. 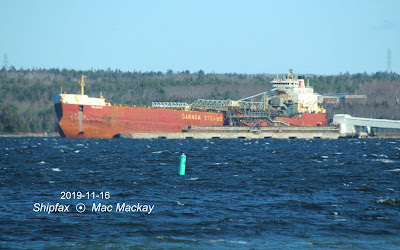 Salarium docks stern in to make it easier for the shoreside ship loader to function.
(The ship does not seem to have loaded much in the 23 hours it had been alongside when I took this  photo this morning.)

The ship is on long term charter to carry salt from Mines Seleines in the Magdalen Islands, but that does not take up all its time, so it is free to pursue other work when it is available. In October the ship even made one of its rare calls to the Great Lakes.

On that trip (its first since 2017) it went to Windsor*, ON, loaded salt for Twin Ports (Duluth / Superior) WI, then loaded iron ore pellets at Two Harbours, WI for Quebec City. It seems to have come directly from that assignment to Halifax to load gypsum - by passing the Magdalen Islands en route.

[*The salt mine in Windsor, ON is owned by K+S Windsor Salt, also owners of Mines Seleines.]

As a Canadian flag ship (built in 1980 as Nanticoke, 21,870 gt, summer draft capacity 35,100 tons) the ship can deliver its gypsum cargo to a Canadian port. The ship was renamed in 1990 when it was chartered to la Soçiété Québecoise d'Exploration Minière [SOQUEM]. Normally the ship keeps running well into the winter, and lays up in Montreal during the most severe ice conditions.