Following on yesterday's harbour trials in Bedford Basin the first Arctic Offshore Patrol Ship AOPS#1 set out on sea trials today.  Using the name Harry Dewolf although far from being officially commissioned with that name, the ship got under way from Halifax Shipyard, with no name or pennant number displayed. The 430 was painted on its hull even before launch, but has now quietly vanished. 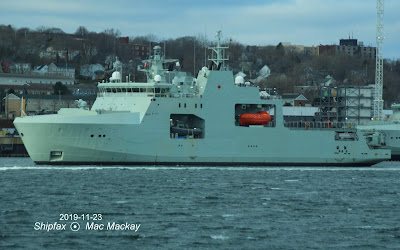 The period of builders trials will apparently now extend into the new year and will be a period of feverish activity for Irving Shipbuilding leading up to handover to the RCN sometime in the first quarter of 2020. 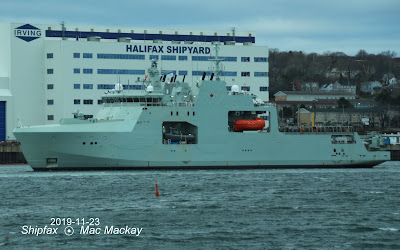 The overly optimistic delivery dates for the ship have been extended from the original estimate of late 2018. As lead ship of its class, there is every reason to expect delays and extensions, but having reached the builders sea trials stage, there must be some light at the end of the tunnel.

Today's builder's trial will be an all day affair, but extended multi-day trials will be necessary before the ship is handed over to RCN for its own trials and commissioning.