Glovis Countess and a strike

Glovis Countess arrived at Autoport this morning for what I believe to be the first time. The 60,213 gt, 18,701 dwt ship was built in 2010 by Mitsubishi Heavy in Nagasaki as CSAV Rio Geike. It changed names in 2013, and current owners are associated with Dong-A Tankers (hence the DAT on the funnel), a major South Korean ship operator. The ship has a capacity of 5,221 cars.

Glovis Countess has rounded Ives Knoll and is headed for Eastern Passage and Autoport.

The Dong-A Tanker company sought creditor protection in April 2019, but it is unclear if DAT Countess Maritime SA (owners of this ship) and DAT Maritime Co Ltd (technical managers) are involved in those proceedings.

Once off the Autoport berth tugs swung the ship to come alongside starboard side to.

Autoport is owned and operated by CN and as of this morning some three thousand CN conductors and yard workers were on strike. Autorack rail cars were still being switched at Autoport, but that may not last for long if management tries to take on operating jobs.

The ship arrived from New York, so must be loading export cargo, which would already be on the pier waiting to load, so not likely effected by the strike.

Originally due yesterday, the ship spent the night off St.Margaret's Bay after pilotage operations were suspended. There was still some swell running today, but conditions were much more benign. 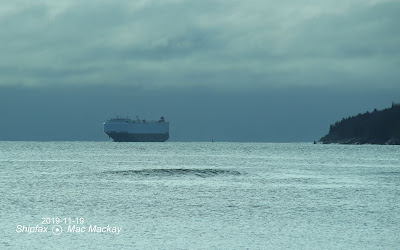