As promised gloomy weather and early sunsets resulted in some dark images today. First in and early  out today was K-Line's Apollon Highway (Panama flag) painted in the latest K-Line livery.

Another short term visitor was the Malta flag La Partenais a member of the Louis Dreyfus Bulk  fleet, An open hatch type bulker of 24,604 gt, 40,652 dwt, the ship was built as Crescent Star in 2015 by Yangfan Group, Zhoushan to a B-Delta 40 fuel efficient standard design. It carries four 30 tonne cranes with grab buckets. The ship was delivered as La Partenais and entered into a long term management charter with Louis Dreyfus. It carries a variation on the traditional the "LDA" funnel [Louis Dreyfus Armateurs]. This one has "LDP" on the white band. This may stand for LDAP a partnership established with financiers FFP [Peugeot] and Bank PBS to build and own this and four similar ships. 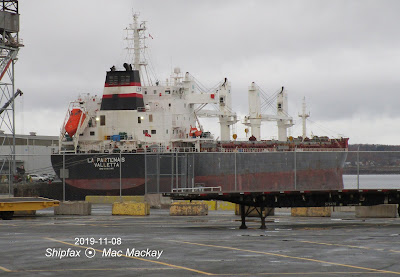 The ship arrived from Baie Comeau, where it presumably unloaded bauxite. While tied up at pier 27 the ship appears to have landed something from its number 5 hold. It did not load or unload any cargo that I could detect.

I was determined to get a photo, despite fading light, to show the ship's bluff bow. Its next port is given as Boston - hardly noted for bulk  cargoes, so perhaps it is headed for drydock.

In for a longer stay is the tanker Anemos I at Imperial Oil #3 dock. Launched in 2007 as Anemos by Hyundai Mipo, Ulsan, the 27,916 gt, 47,823 dwt ship was renamed on delivery to owners Splendour Shipholding SA under the operation of Capital Ship Management.

The ship gave Sept-Iles, QC as it last port. That would mean it loaded its refined product cargo (likely in Antwerp) then delivered some to Imperial's depot in Sept-Iles , then came on to Halifax with the rest. Imperial's regional depots serve customers by truck. 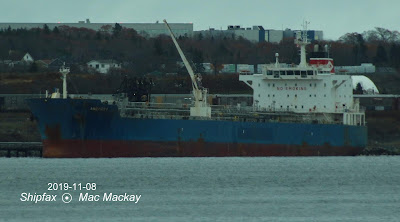