Good News all round

There was good news on two fronts today. The lobster season got off to a safe start and the CN strike appears to be over. 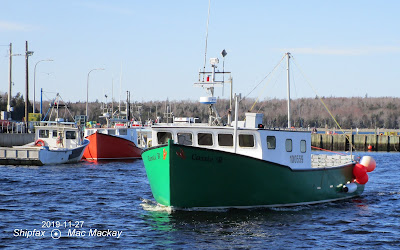 The Cassie R returns to port in Eastern Passage having placed its traps for the first time this season.

It was an unusually fine day today, but colder weather and high winds are on the way. Fishers always hope for some good weather before Christmas to capitalize on premium prices and high demand.

CN Rail conductors and other striking workers will be back on the job tomorrow morning, ending an eight day strike. It may take a few days for operations to return to normal, particularly in the container sector, although from my observation, the boxes were still moving in and out of terminals in substantial quantity.

Rail car loadings will continue at Halterm even though demolition work on an old Rubber Tired Gantry (RTG) began today. 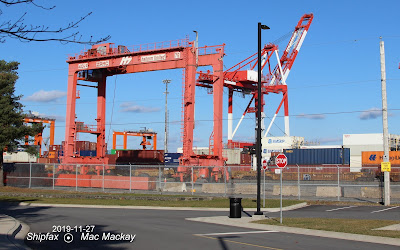 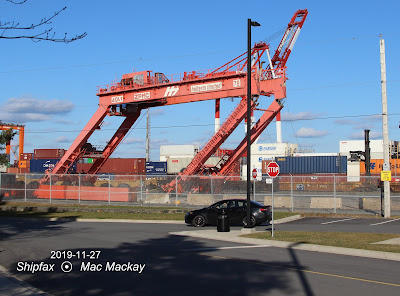 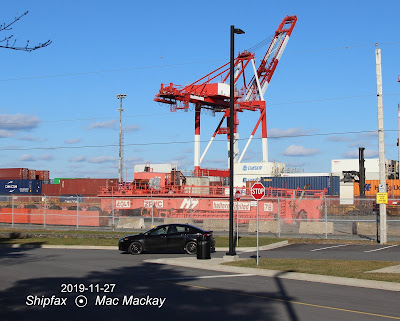 After several hours of preparation including cutting through the steel at the top of each leg, an attempt to pull the gantry over using a crawler crane failed. However a Halterm stacker forklift was called in and the unit was soon "pancaked" on the ground where it will be cut up. (Wires were stretched from the top of the gantry beams to the stacker. 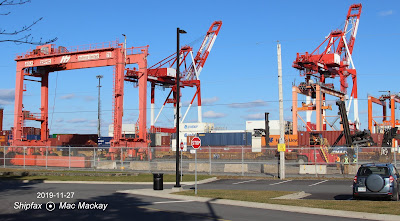 New RTGs have been in service for some time (they can be seen in the background of two of the photos above) but there are representatives of a previous generation as well.