Bedford Basin was the main centre of interest today for the Coast Guard, Navy and commercial vessels. Coincidentally several of the vessels had connections with the month of November.

The fourth of five ships in the G4 series built in China for ACL, it made its first call in Halifax May 23, 2017, six months later than expected in November 2016. The first ships in the series have had a number of mechanical issues and the second ship, Atlantic Sail has been out of service since April when it was drydocked in Hamburg. It is now scheduled to sail from Liverpool November 17 and is due in Halifax November 25.

The Canadian Coast Guard's Arun class lifeboat Clarks Harbour made a trials run from the Bedford Institute to Bedford Basin. 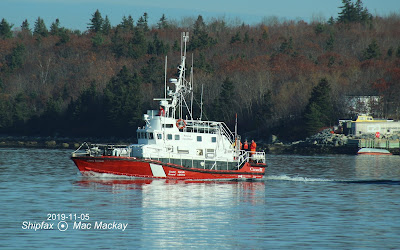 The boat is likely completing its yearly refit before the start of the District 33, 34 lobster season, the last Monday of November. As the busiest SAR lifeboat, working from its home port on Cape Sable Island, it needs to be in good working order.

Last year however it broke down off Halifax November 10, 2018 when returning from refit in Cape Breton. It was towed into Sambro, and made it to Lunenburg before it needed more attention. The boat apparently had fuel system related problems. Clarks Harbour was built in 1996 and should be on the replacement list.

HMCS Shawinigan MM 704 made its way to Bedford Basin, tying up at the Bedford Magazine. 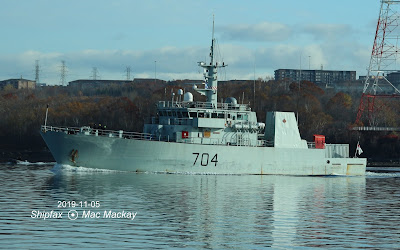 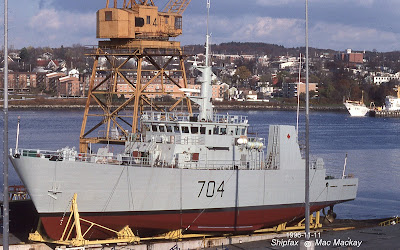 The ship was named for the hometown of then Prime Minister Jean Chretien and was the second ship of the name in the RCN. The first, HMCS Shawinigan K-136, a Flower class corvette built in 1940 by Davie Shipbuilding + Repair, Lauzon, QC, was torpedored and sunk by by U-1228 in Cabot Strait November 25, 1944 with the loss of all 85 hands.

Not quite in Bedford Basin (yet) work is ongoing to launch the second Arctic Offshore Patrol vessel, AOPS2 Margaret Brooke.  Halifax Shipyard has once again marshaled the multi-wheel dollies that will transfer the ship to the launching barge Boa Barge 37. The barge was repositioned yesterday to bow north, aligning it for loading the ship. It may be floated off by the end of the month. 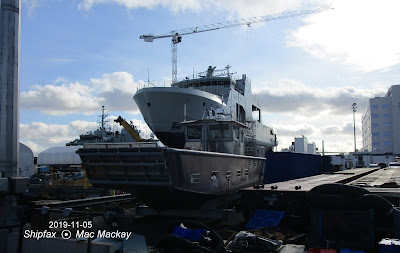 Also on hand is an aluminum landing craft, built by Abco in Lunenburg for AOPS1 Harry Dewolf. One of these craft will be assigned to each of the AOP ships.

Still in Bedford Basin Ocean Force continues to swing at anchor. The container RoRo (and sometime semi-submersible) has been idle in the Basin since completing its assignment with TMSI last month. 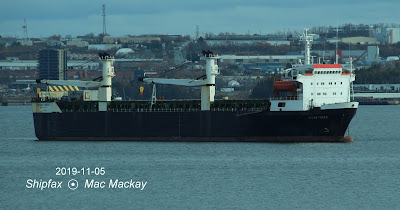 That service to St-Pierre et Miquelon and Argentia, NL, has encountered another glitch as its ship Nolhanava may be subject to detention / arrest due to an unsatisfied  claim by a supplier according to court filings.

Meanwhile  those who have been missing the familiar sight of the Defence Research and Development barge in Birch Cove were encouraged by the presence of tugs and a dive tender at the location last week. Perhaps they were making preparations for the return of the barge which has been tucked away in HMC Dockyard undergoing some refit for many months. Its place has been taken by a flat deck barge - much less interesting than the house like structure we have grown accustomed to. 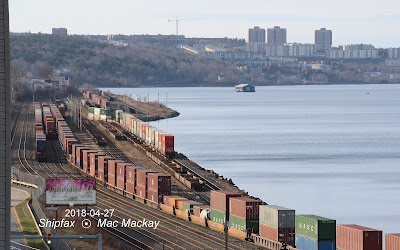