The Freedom class Littoral Combat Ship USS Indianapolis LCS 17 arrived this morning at the same time as the first wave of high winds and heavy rains.

Tugs Atlantic Fir and Spitfire III met up with the ship while it was inbound east of George's Island.

Built by Fincantieri's Marinette Marine in Wisconsin, the ship was commissioned in Burns Harbor, Indiana on October 26. It made its way down through the Lakes and Seaway, sometimes with tug escort, and a brief stopover in Quebec City. It is en route to its home port of Mayport, FL.

This is the ninth ship of its class built in Marinette, and all have called in Halifax on their delivery trips. 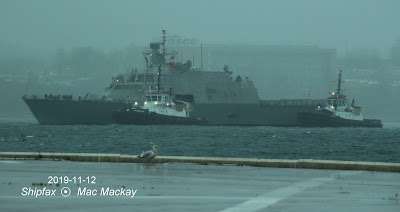 Hardy crew members took up station on deck when even Halifax gulls decided to remain on shore.