Algoma Verity sailed this morning for Tampa, Fl with its cargo of gypsum. 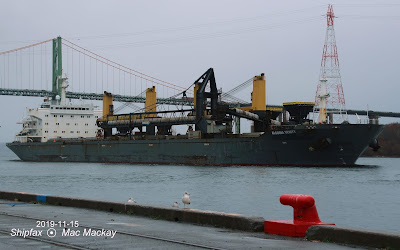 The ship took two days to load - a bit longer than most ships, likely due to having to work around the awkward self-unloading system, but also because some of the gypsum in National Gypsum's Wright's Cove stockpile may have been frozen. [see also yesterday's post.]

Reading the ship's draft marks forward (midships have been obliterated) it appears the ship is drawing about 11.5m which would represent 47 to 48,000 deadweight tonnes - very close to the ship's winter capacity. See the ship's spec sheet - especially the pdf attachment:https://www.cslships.com/en/csl-americas/fleet/vessels-and-specs/algoma-verity

The Narrows was the place to be today - see Tugfax for more of the action.