With the possibility of winter weather coming soon, it was time to check in on nearby 'outports'.  before road travel becomes unpleasant.

Lunenburg is now home to a couple of globe trotting vessels, both of which have recently returned to port after their latest voyages.

Polar Prince, the former CCGS Sir Humphrey Gilbert (built 1959)  is tied up adjacent to Picton Castle  (built 1928).  Both vessels might be considered by some to be past their prime, but they are carrying on useful functions in research, and training and look set to continue in these roles for some time to come. 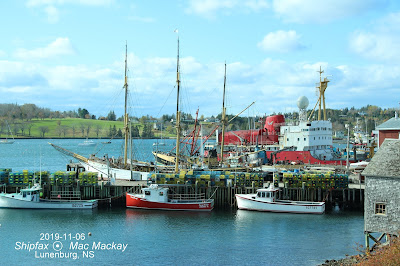 It was a  bright sunny day in Lunenburg on Wednesday as Picton Castle and Polar Prince await their next assignments. Picton Castle returned from its latest round the world trip in June, then joined Tall Ships events including a trip to the Great Lakes). Polar Prince returned to Lunenburg in late October after another summer in the north.

The future is not so bright for the vessel that appears between the two in the photo. Conversion of the trawler Primo to a sailing vessel appears to be stalled. It is listed as owned by the same owners as Picton Castle. Built in 1963 by Geo T. Davie + Sons Ltd in Lauzon, QC, it should have many more years left if work can be found for it. 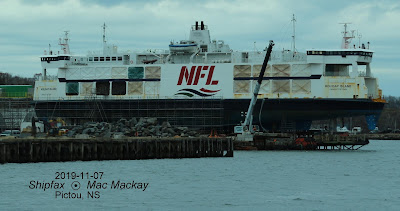 Holiday Island hauled out in Pictou for refit.
The open decks are normally tarped in for the winter.

In Pictou the 1971-built summer ferry Holiday Island has been hauled out at the shipyard for refit. Replacement for the Voith-Schneider propelled ship has been the subject of speculation recently, but there did not seem to be much mention about it during the federal election. New construction seems the likely route in view of the dismal performance of some second hand ferries recently acquired in Europe.

Its fleet mate Confederation was built in 1993 as a result of an election promise - (made by a sitting MP without the knowledge of his caucus or leader according to legend).  Its performance has not always been sterling either, and the Holiday Island is the go to boat. However with the season winding down it is running the Caribou, NS / Wood Island PE route solo.

What appears to be a former Province of Nova Scotia cable ferry is tied up near the shipyard,  less its wheelhouse. 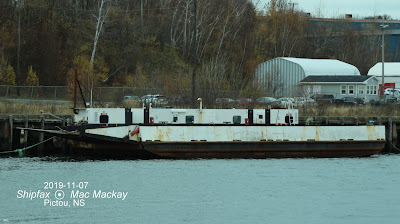 Devoid of any name, but still equipped with at least one hydraulic ramp, the boat may have been converted to a work barge. It is possible that it is the former Englishtown ferry Angus MacAskill replaced in 2010. Since the Province of Nova Scotia does not register its ferries, it is difficult to trace individual units.

Tenders were supposed to close October 18 for two new cable ferries for the Province (one for Country Harbour and one for Little Narrows) but I have not heard the results yet.