After yesterday's wild winds and driving rain, it was colder, clearer air today. The fresh breeze did not hinder shipping, but it certainly felt more like late autumn as temperatures dipped below freezing. 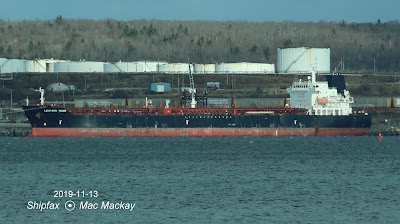 Far from the equatorial headquarters of its owners, Unicorn Moon Pte Ltd of Singapore, Leopard Moon was discharging cargo at Imperial Oil's number 3 dock. Built in 2013 by SPP Shipbuilding in Tongyeong, South Korea, it is a 29,939 gt, 49,999 dwt product tanker. In a bit of a change from recent deliveries from Antwerp, this one appears to be from Baton Rouge, LA. Exxon Mobil operates a giant 503,000 bbl/day refinery in the port city located just over 200 miles up the Mississippi from the Gulf of Mexico.

Clearing for Rotterdam the Hooge made its way to sea early this afternoon, allowing for a clear photo  unencumbered by the fences in my November 9 report.

The crane set up is interesting, allowing a clear deck space between for four stacks of forty foot containers. On this trip access to number three hold was kept clear for discharging its nickel sulfide cargo. This is a unique trip for this ship as the Nirint Schedule shows the ships Geeske taking over this slot but with no call in Halifax until January. 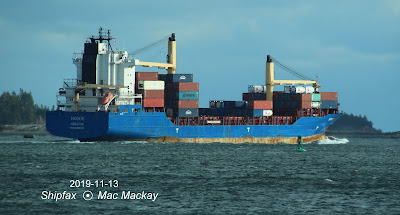 Hooge is one of six sister ships in the Briese Schiffahrt fleet, all named for islands in the North Frisian group.