High winds lead to suspension of pilotage operations in Halifax over night and this morning. Conditions will be reviewed at noon time.

Ships that do not require pilots are free to move at their own discretion and that includes ships of the RCN. HMCS Ville de Quebec put out to sea this morning. 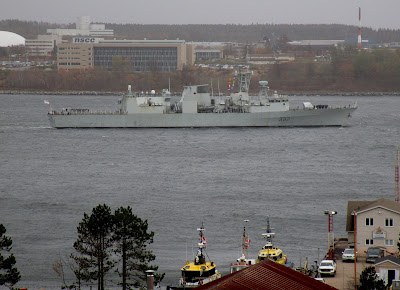 Pilot boats remain tied up at their dock as Ville de Quebec heads outbound.
( left to right: Capt. E.T.Rogers, APA No.18, and Nova Pilot occupy the north side of the Svitzer Canada wharf.) 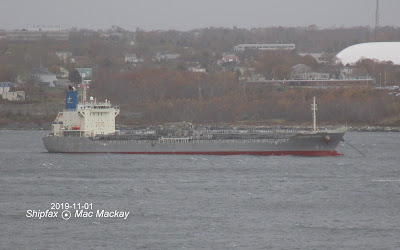 The tanker Southern Quokka tugs on its anchor at number 5 anchorage. The ship arrived late last night from Rostock, Germany and was to sail early this morning. On the small size as product tankers go, it registers 14,965 gt, 26,077 dwt. It was built in 2017 by Asakawa Shipbuilding in Imabari, Japan, for Southern Dragon Chemical SA. Japan. [The quokka is a cat sized marsupial found in a few areas of Australia.]

The more common size of tanker we see is the Medium Range of up to 50,000 dwt, such as Elka Eleftheria which arrived yesterday from Saint John for Irving Oil. It measures 27,539 gt, 44,787 dwt. Built in 2001 by Brodosplit in Croatia, it was launched as Elka Eleftheria but delivered as Fulgar and carried that name until 2009.

Ships due to arrive in Halifax today are loitering offshore until conditions improve. These include the container ships Gerhard Schulte, Zim Momaco and Skogafoss and the autocarrier Theben

"Surf" was breaking over the cells of the pier 42 extension this morning, although filling was still underway where it could be reached by a shore based conveyor. 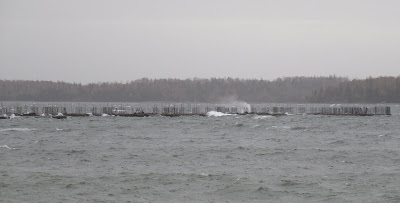 McNally Marine demobilized its barges to pier 9C yesterday in view of the predicted weather. 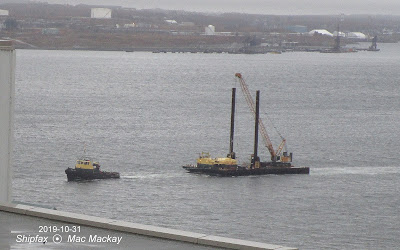 The tug Mister Joe heads north yesterday with Derrick No.4 making an early start for the weekend.