November 11 is observed as Remembrance Day and most activity comes to a halt at least for a minute at 11:00 am, the hour of the Armistice that ended World War I. As might be expected there are numerous memorial sites around Halifax recognizing the contributions from various communities and the different armed services.

Nevertheless (shamefully) the day is not a statutory holiday in Nova Scotia, so many businesses remain open and industries such as construction and shipbuilding continue unabated. Some enlightened employers however do close their doors for the day and allow their employees to observe the day in their own ways. 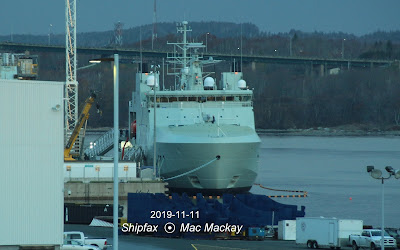 At Halifax Shipyard it was a regular working day, with the newly launched AOPS2 (future Margaret Brooke pennant number 431) alongside at pier 6, after yesterday's float off (and yes Shipfax did not observe that operation). 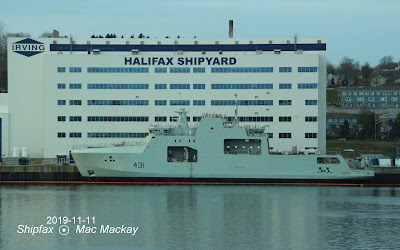 Halterm welcomed Tropic Lissette for Tropical Shipping on the usual Monday schedule. The ship was off for one trip due to some mechanical issues, and may still have some deficiencies, but is at least back in service.

Cerescorp had two ships at Fairview Cove. CLI Pride is back again after several trips to Montreal and is now headed back to Rotterdam.

The much larger Budapest Bridge had the whole terminal to itself later in the day after CLI Pride sailed. 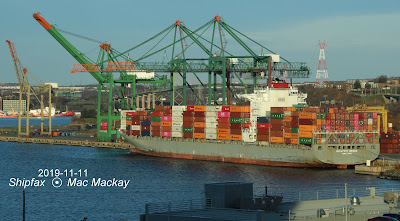 Even National Gypsum got in on the act today with CSL Tacoma sailing this morning for Savannah with less than a full load. 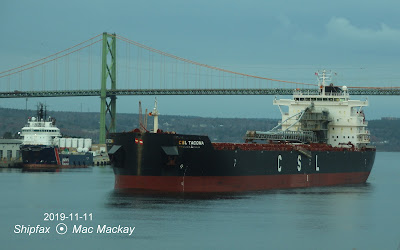 Siem Hanne was alongside at the southernmost end of pier pier 9B, and late in the day the Atlantic Condor arrived for pier 9C north. 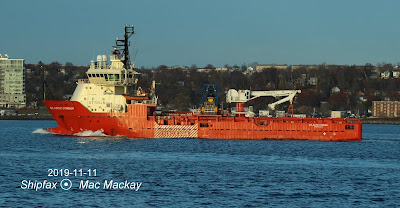 One of the most attended Remembrance Day services is at the naval memorial at Point Pleasant Park. Seen from Purcell's Cove shortly after the end of the service, it was a particularly fine day to linger along the shore while poppies were placed at the base of the monument. 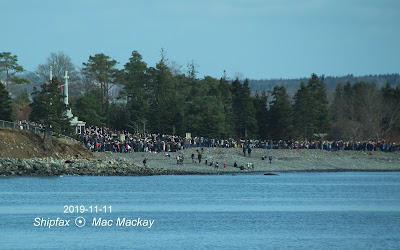 Perhaps the most remarkable aspect of the service - and maybe not noticed by participants, was the aggregation of seals on rocks just off the point as the service progressed. From one seal at the start of the service, there were at least six by the time eleven o'clock had passed. 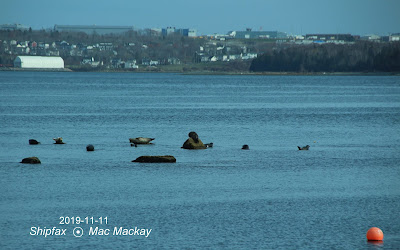