Tankers in and out

The usual comings and goings at Irving Oil and Imperial Oil this week saw one tanker at each facility.

At Imperial Oil it was the Pro Onyx a very new ship, just delivered in September by Hyundai Mipo, Ulsan. It is a chemical product tanker of the MR type, 29,655 gt and 49,999 dwt (or 49,936 according to some other sources). 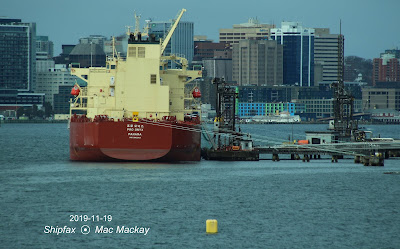 Although very new it does not appear to be too different from most ships of its type, with two exceptions. One is that its funnel is offset to starboard. This may be as a result of incorporating an exhaust gas scrubber system within in the funnel casing.

Note also the traditional lifeboat placements, port and starboard with davits, instead of the stern launch type seen in recent years.

Meantime at Irving Oil Elka Glory is back with another cargo from Amsterdam (it was first here in April).

Also a MidRange product tanker, of 27,612 gt, 44,598 dwt, it was built in 2003 by Brodosplit in Croatia. It has the stern launch type lifeboat. Intended to ease launching under difficult conditions such as a list, there have been numerous accidents in training with many serious injuries. More important to crew survivability, particularly with tankers, is the enclosed lifeboat, now seen on most ships.